This four-cheese grilled cheese with green onions is not only extremely tasty, it’s also extremely easy (it’s baked in the oven!).

Wow, you guys. It has been a long time. I can honestly say that February was the most stressful month of my entire life. It’s the busiest time in the year at my job, with lots of meetings, and at home most of my spare time was occupied studying for my Board Certified Behavior Analyst Exam. A whole bunch of snow days gave me lots of extra time to study but it was time well spent and Philip encouraged me just to give myself a break and really take the month off from blogging. I’m glad I did; I was so tired when that test was over on Tuesday (now it’s time to wait on pins and needles to see if I passed!).

If I had added keeping up a blog to that plate I probably would have had a major meltdown (I had a minor one, in which I sat down in the middle of the kitchen floor in tears because I missed a step in my recipe and Philip had to finish making dinner. He’s a trooper.). Anyway, you all don’t want to hear me whine, and that wasn’t the purpose of this post anyway…but I guess I just needed to justify my absence.

The purpose of this post? To tell you about a couple of discoveries I’ve made over the last couple of months. First of all, I learned from Sarah Carey of Everyday Food that you can bake a grilled cheese (I was going to post a link to the video for you but I can’t find it!). Do you have any idea how this changes things? I love grilled cheese and grew up eating the ones my mom fried in a pan, which is how I’ve always made them, trying different techniques. Do I cover the pan or not? High heat, medium heat, low heat? Anyway…Sarah opened my eyes. Baked grilled cheese? Just preheat the oven, put the cheese on the bread, butter the bread, bake it….and there you go. A grilled cheese sandwich without the tears.

The other thing? Well, I hadn’t eaten at Panera in ages until I went there with my mom and sister on winter break. I ordered the fontina grilled cheese sandwich and was taken aback by how much I liked it. The menu describes the sandwich like this: “Vermont white cheddar, fontina, reduced-fat chive & onion cream cheese spread and a four cheese Italian blend grilled on our freshly baked, thick sliced All-Natural White Bread.” The cream cheese spread added great flavor to the sandwich and a crispy lid of browned cheese (like a “frico“) topped the sandwich. Philip and I went back a couple of weeks ago so I could try it again, and this time I discovered thick sticks of unmelted cheese. Sigh. I decided I had to make this four-cheese grilled cheese sandwich at home.

Now, if you are going to call a grilled cheese a “fontina grilled cheese”, why are you going to put cheddar on it? For my four-cheese grilled cheese I decided to nix the cheddar so it wouldn’t overpower the milder fontina. I also decided that the cream cheese did not need chives, mostly because every time I buy chives I end up with a bunch of rotting chives. I really hate that. Instead of a crusty white bread, I used a light, soft wheat bread from Peter Reinhart by way of Smitten Kitchen that I’ve been making weekly for the last month (you really should try it, it’s stellar). Finally, instead of browning the cheese on top of the sandwich in a pan (which, admittedly, would have added some brownness to the sandwich but I was not into dirtying another pan). Baking the four-cheese grilled cheese sandwiches then broiling the top equalled one of the best grilled cheese sandwiches I’d ever had.

By the way, I have recently discovered that a grilled cheese refrigerated and reheated in the microwave, while not as crispy as it is when served immediately, makes a surprisingly good lunch for someone who has a really hard time finding a work lunch that’s truly satisfying.

This four-cheese grilled cheese with green onions is a revelation!

Do you have a favorite grilled cheese recipe or method? Share it in the comments!

Also: Chattanooga’s own Beth Kirby of {local milk} fame has been nominated for a Better Homes and Gardens blogger award. Congratulations, Beth!

You can use just parmesan or Romano cheese to top the sandwiches, or omit the browned cheese topping altogether (though I'm not sure why you'd do that). 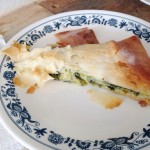 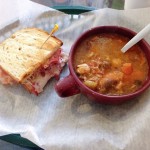