How have I not written about Formosa Chinese restaurant? That’s a rhetorical question, I suppose, but Formosa is one of Hixson’s longest-standing restaurant and (since Mandarin Garden closed) the place that we generally go to get Chinese food close to home. However, every time that we’ve gone I, for one reason or another, haven’t been in a blog post mood (it was never because I didn’t like the food, but, for example, I remember that we went there one time the night before I had surgery).

It was raining cats and dogs Saturday and I was definitely not feeling going out of the Hixson area, particularly not to any spot where we would have to do a lot of walking (i.e. downtown). We considered the tiny handful of Hixson places that we still have yet to visit and Philip pointed out that we really should go to Formosa, considering how long it’s been around. It’s really a Hixson institution. Please excuse the awful photos in this post….it’s very dark in the restaurant.

We were seated immediately and given lunch menus, since it was only around 1 p.m. The lunch menu is considerably smaller than the dinner menu, with a few specials (mostly chow meins and egg foo young plus few other standards like sweet and sour chicken) listed on one side that included either an egg roll or soup and then another list of entrees on the other side. My favorite thing about Formosa (I’m just being honest here) is that they bring you a bowl of fried wonton strips (which I call Chinese potato chips). Those things are just addictive. They also bring sweet and sour sauce to dip them into, but I really am indifferent to that.

We ordered our meals off the specials menu. We both wanted soup and and egg roll so we ordered egg rolls separately. I like that their egg rolls don’t have any weird pink meat (the meat is pink because of curing salt, but that doesn’t make it any less bizarre in my opinion). They are filled with ground pork, baby shrimp, and cabbage. They were brought out immediately, which might make you worry that they wouldn’t be fresh, but they were fresh, crispy, and hot. The server brought us some hot mustard too, but aside from a tiny fingertip dab that I tasted it was too hot for me. I ordered egg drop soup, which was hot, well seasoned, and had lots of egg and green onion in it. Philip had wonton soup. He said that the wontons seemed housemade and that the soup was also tasty and well-seasoned.

I decided to get the chicken with mushrooms, which is described in their dinner menu as “sliced chicken breast sautéed with mushrooms, water chestnuts, and snow peas in a light sauce”. There were also carrots and pieces of cabbage in the sauté, and it was served with fried rice. Their fried rice is more basic than most, basically just seasoned and fried and not mixed with carrots, peas, and eggs, but still quite good. The portion of sauté was fairly large, large enough for me to bring home probably more than half of it to have for lunch the next day. Everything was well cooked, the vegetables just crisp tender (besides the mushrooms, which were very tender) and the chicken very thinly sliced and very tender considering that it’s chicken breast, which tends to be dry. The sauce was indeed light and not overly salted. The thing I like about Formosa is that I don’t feel bloated and icky like I do after eating at some Chinese restaurants (I think it’s MSG that makes me feel that way, though I know a lot of people dispute the whole MSG negative effects theory).

Philip had the beef chow mein, which is very thin slices of beef sautéed with Napa cabbage, onion, zucchini, and carrots and is also served with fried rice. The meat was incredibly tender and the sauce light and nicely seasoned. The vegetables were nicely cooked, crisp-tender just like mine were, and Philip also had enough to bring home for lunch. My friends, it is never sad to have leftovers to throw in the microwave when you arrive home starving after church.

Like I said, the dinner menu is much larger than the lunch menu, with soups, appetizers (including chicken fingers and fries, which always makes me laugh), family dinners (for families of 2, 4, 5, or 6), vegetable dishes, Chef’s Specialties (including sesame chicken and General Tsao’s-their spelling-which is different from what is served at most Chinese restaurants, as it is thinly sliced instead of just spicier sesame chicken). They have sections of seafood, chicken, beef, pork, duck, plus chow meins, lo meins, chop suey, fried rice, and egg foo young.

The decor in Formosa Chinese restaurant, I’m not going to lie, is a little dated. Honestly, I don’t think it’s changed one iota since I was a kid in the eighties and would go in with my parents to get take-out (not that I ever ate it, I wouldn’t have touched that stuff with a twenty-foot pole as a child). I don’t really care too much about decor, though. I mean, if a place has great decor, I’ll notice, but I’m more concerned about the food and service. Our service was quick and friendly (if very business-like) and the food is consistent and always good. I know it’s “American Chinese”, but where do you find anything but around here? Formosa Chinese restaurant is a great place…it’s not going anywhere any time soon. 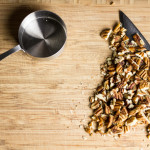 Oven Pancake with Pears and Pecans 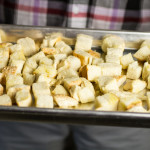