My current food world view grew out of watching the documentary Supersize Me by filmmaker Morgan Spurlock.  The premise of the doc was to prove or disprove the assertion of the fast food industry that fast food could be a regular part of a “healthy diet,” on the heels of a “cheeseburger suit” in which two girls in their early teens sued a prominent fast food chain for “making them” fat.  Spurlock ate nothing but McDonald’s for thirty days, gaining a good deal of weight, losing muscle (since he exercised as little as possible during the thirty days), and actually doing damage to his internal organs.

Thirty days of fast food is clearly an extreme, and when people make the choice to eat fast food day in and day out, there is no one to blame but themselves, or in the case of these young girls, their parents….at least in theory.  Now, don’t go jumping on me for the “at least in theory” part.  I’m not heaping the blame on the fast food industry.  I just ate at a fast food restaurant last night (actually, the chain where I ate last night prefers to be called a “quick-casual” restaurant).  I haven’t forsaken fast food altogether, because, well, it’s fast, and unfortunately sometimes that’s what you’re looking for.

What I am saying, though, is that while the choice of what to eat is up to us, the industry is certainly not shedding any tears over its “heavy users,” fast food speak for people who visit an establishment frequently.  Nay nay, they are spending millions each year to get us in the doors, and with the crazy hectic lives we have built for ourselves, we are literally buying in to it.  It’s our choice, but you have to wonder, if the average American was really educated about what’s in the food, how the food comes to be, and the marketing practices that draw us in, would we be so quick to drive through?  My guess is that many of us would, and many of us would rethink our eating strategies.

Another tipping point was reading Fast Food Nation by Eric Schlosser.  Schlosser spent a lot of time visiting ranchers, farmers, meat-packing plants, fast food restaurants, and average Americans who have been affected by the fast food industry in one way or another.  Let me tell you, there are a lot of things in that book that you don’t want to know, but you need to know.  Too much to elaborate here, but if you have questions about what you’re eating, read the book.

The bottom line about fast food is that of course most of the people in the fast food industry aren’t bad people, but the industry is just that-an industry.  They’re out to make money, bottom line.  Let’s face it, even the “nice guys”-the organic companies, the small producers, etc., are out to make money.  I mean, hey, that’s why I work!  We’ve all got to pay our bills.  The difference is that sometimes it seems like we’ve sold our souls to fast food.  Watch Supersize Me.  There’s a scene where Morgan Spurlock is showing pictures of iconic people to young children, probably between the ages of 4-6 years.  Most of them didn’t know who George W. Bush (the President at the time of the filming) or Jesus were….but every one of them knew who Ronald McDonald was.  Or, on the first season of Jamie Oliver’s Food Revolution, Jamie Oliver showed all sorts of vegetables to youngsters at an elementary school.  Many of them didn’t know what the veggies were called-and some didn’t even know that french fries were made from potatoes!  They were used to seeing them in that little paper container.

On top of that, fast food is cheap…in more ways than one.  It’s inexpensive….and it’s cheap.  As in (usually) low-quality ingredients.  Sadly, the low cost factor makes it very popular.  In Food, Inc., there’s a scene where a family on a fixed income goes to the grocery store and tries to buy produce.  The youngest daughter wants some fruit (pears, I think) and the older daughter points out that the per pound cost is too high, and the pears go back in the bin.  Later, the family goes and orders a sackful of food from the dollar menu at Burger King.  The dad has diabetes, and his medications are very expensive.  Do you see the problem here?  My issue is not with the family, not at all.  They’ve got to do what they can to keep food in their stomachs.  My issue is with the fact that for the price a a few pounds of produce, a family of four can eat an entire meal at a fast food restaurant.  For less than a pound of pears, they can buy a 2-liter soda.  Why is that?  Because the government subsidizes many of the crops (especially corn!) that go into those products, so our tax dollars pay up front, allowing an artificially low purchase price, and then we pay again on the back end.  With most crops, though, this isn’t the case, hence the reason that the fruits and vegetables that we all need are so much more expensive than junk food.

So, where am I going with this?  Well, here you go.  Will you automatically get fat if you eat fast food?   No.  It could happen, but it could also happen on all homemade, whole foods from the organic grocery store.  Our food choices are up to us.  Fast food isn’t bad, but too much of it probably is.  I mean, do you really feel great after you eat fast food?  I don’t (as I mentioned in the first post, the salt gives me an earache these days).  Do you want to think about where your food came from?  If you don’t want to know, how much of that do you want to eat?  I try to stick with more local and regional fast food establishments.  I realize that health-wise they’re probably not any better, and I know that they aren’t getting their food from the places I usually get the food I cook at home, but often those places treat their employees better, have lower turnover, and have better service (and often better food).

Most of the time, though, I just err on the side of staying home.  A sandwich is fast food too, dontcha know?  I like to control my ingredients, to know what’s in my food, to know where it came from.  Fast food has its place, but in my life, there’s limited space.  I probably spend more per person in my home on groceries than the average bargain-hunter, but I also don’t spend much at all in restaurants, fast food or not, leaving more money to buy healthy whole foods.  It’s a choice I’ve made, but you have to make your own.  Educate yourself about what you eat! 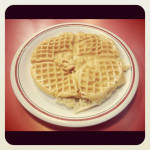 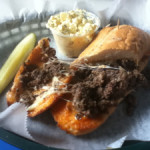