I love soup.  I love soup perhaps a little too much.  Potato is my favorite, but I make all kinds of soup: spinach, broccoli, chicken noodle, tomato (with copious amounts of sherry and cream), mushroom, taco….I could go on.  During the winter I make soup probably at least once a week, but even when it’s 90+ degrees outside my soup-making instincts cannot be stopped.  I heard, though, first from another blogger when I ran into her at the farmers market a few weeks ago and then again on the show The Chew today, that spicy foods help to cool you down because they make you sweat…I wonder if that principle applies to foods that are hot temperature-wise?  But anyway, I don’t see why we single out soup as something that shouldn’t be eaten during warm weather.  I mean, burgers are warm….chicken is warm…lots of “summer” foods are warm.  I personally will not discriminate against soup.

What I find interesting is how many people seem intimidated by the idea of making soup.  It’s as if people see soup as something that should be left to manufacturers, which I’m certain is precisely what Campbell’s would like for you to think.  It just isn’t so, though.  Soup is so simple….just a bunch of stuff thrown in a pot and cooked through.  Nothing to be intimidated by.

Luckily, I grew up eating homemade soups.  Oh, I ate my fair share of Campbell’s cream of chicken (and I’m not ashamed to admit that to this day I still crave it when I’m sick)…but my mom makes a tasty beef stew, and she makes vegetable-beef soup similar to what my grandmother used to make, complete with tiny alphabet pasta.  I recall my grandmother making me a potato soup with carrots and celery in it once when I was home sick from school….but I also remember the potato soup that my mom would make when I was a kid, on the nights she didn’t really feel like cooking….just cut-up, boiled potatoes in buttery, warm milk.  I probably haven’t made potato soup like that in eight or nine years (maybe more) but I guarantee you that pairing that with some saltines would take me right back to my parents’ kitchen.

The true shame of relegating soup to the winter months is the fact that summer vegetables lend themselves so beautifully to soup.  It’s virtually impossible for me to look at an ear of corn without  thinking of corn chowder…and red potatoes?  Duh.  They were made to be soupified.  Paired with a BLT, grilled cheese, or just some crackers (my new discovery is Ak Mak crackers-they’re whole grain and they have sesame seeds!), this is a meal that’s simple but tastes anything but.  And there was enough for leftovers!

By the way, I have people ask me quite frequently how I cut my corn (FYI, I don’t eat corn on the cob….I cut if off the cob. I have a ridiculous overbite and it’s not fun to eat corn on the cob with an overbite….). I learned this trick off of Food Network….just set the ear into the center of a bundt pan or tube pan and run the knife down the sides. All the kernels fall into the cake pan and you don’t have a corn cob sliding around everywhere while you’re wielding a knife. 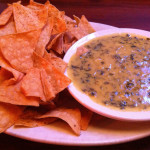