Wow, is it really March?  I just typed “February” into the title field for this post then realized, “Wait, it’s March!”  It’s snowing here in Soddy-Daisy right now (and has been since yesterday morning) but it’s not cold enough to stick and besides, snow on the weekend is a total waste as far as teachers are concerned.  No matter, though.  Spring break is at the end of March!  I have a full week of doing nothing planned and I can’t wait.

Anyway, I wasn’t feeling too hot yesterday (still not) and didn’t really have a restaurant in mind.  I wasn’t in the mood to go much of anywhere, really, but there also wasn’t any food that I just wasn’t in the mood for.  I really wanted some soup but I couldn’t think of any locally owned restaurants that claim soup as a specialty, not since Soup’s On that used to be on Broad closed (and I don’t think they were ever open on Saturdays anyway).  Soup suggestions, anyone?  Anyway, Philip suggested El Sol, the Mexican restaurant in the building that was formerly Hillbilly’s and before that Backyard Burgers-near Highland Plaza on Hixson Pike.  Fine by me.

We were seated quickly.  There was only one server working the floor, but at 1:30 in the afternoon there were only a couple of other tables occupied.  He took our drink orders and suggested queso dip, which we of course accepted.  He quickly brought out our waters, our queso, a basket of chips, and some salsa.  The queso was standard Mexican restaurant queso…not too spicy, creamy, not too runny but not too thick.  The chips and salsa were the same….the chips pretty standard, not too thick, not greasy, pretty fresh.  The salsa was mild and not super-chunky, which is always a plus for me because I am not a fan of chunky salsa (for this reason I do not like salsa from a jar).  Not bad but it didn’t stand out in any way from any other Mexican restaurant in the area (besides a couple that shall remain unnamed that I have not blogged about whose chips have been stale the last couple of times that I’ve been).

Again, the menu was pretty standard.  There was a lunch menu on the back with lunch specials served until 3 p.m.  I decided on taquitos Mexicano, which come stuffed with shredded beef or shredded chicken.  I ordered one of each.  Taquitos are, of course, tortillas (theirs were flour) rolled around a filling and fried.  These were served with sour cream, pico de gallo, guacamole, and shredded cheddar (an unusual choice for a Mexican restaurant for sure) and refried beans and rice.  I found the taquitos to be a little bit greasy but they did have a good flavor.  I am not one to choose chicken over beef (ever!) but in this case I actually liked the chicken taquito better than the beef because the beef had large pieces of onion in it.  The guacamole was fresh-tasting and very smooth.  I really liked the rice…it was seasoned well and not clumpy.  The beans were pretty standard.

Philip ordered the burrito El Sol, which contained beans and rice, lettuce, and chorizo (not listed as an option on the menu, but just ask!).  It was covered with cheese sauce and salsa verde (green or tomatillo salsa).  Philip is a huge fan of chorizo and has taken to ordering it at all the local Mexican restaurants.  He liked their chorizo a lot-better than El Metate’s, as good as Delia’s, and not extremely greasy, which a lot of chorizo is.  Overall, he really enjoyed his burrito and would order it again.

For some reason, dessert is not an item that we often order in Mexican restaurants, but their dessert menu (curiously) is at the front of the menu (not an afterthought at the end like most) and we happened to notice it.  While my eye was immediately drawn to the banana chimichanga (hello, bananas Foster in a fried tortilla?!?!) Philip despises the texture of banana so that idea was out.  He was all about the sopapilla, though, and when we had finished our lunch he wanted to order one.  I was definitely game.  Their sopapilla is basically a fried flour tortilla sprinkled with cinnamon sugar and drizzled with honey, topped with whipped cream (okay, Redi-whip) and a maraschino cherry (you can also get ice cream if you like, presumably for an additional charge).  Funny, I just got a new Tex-Mex cookbook (The Homesick Texan Cookbook) and the sopapilla recipe in it is not made with a flour tortilla (it’s made with fresh dough) but I’ll cut them some slack.  This was pretty good, reminiscent (in my opinion) of the cinnamon “crispas” that Taco Bell used to serve in the Eighties, and that made me think of my grandmother, which is definitely a happy thing.  They were good, but I want to make the real thing soon and share them with you!

Overall, I’d say that El Sol didn’t stand out as any better than the average Mexican restaurant in the Chattanooga area, but it definitely wasn’t below average.  Delia’s still stands undefeated in my play book.  I’d eat at El Sol again, though, and if you are thinking about going to the Taco Bell just down the street…..keep driving for a minute and pull on in to El Sol.  It’s worth the extra minute’s drive. 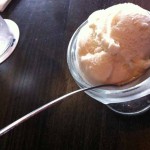 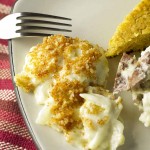