Like everything else that my grandmother ever made, her easy sloppy joes were indeed delicious and they took less than twenty minutes to assemble.

Does anyone remember the Lunch Lady Land sketch from SNL featuring Adam Sandler and Chris Farley, circa 1994? That was back in my SNL discovery days. I was maybe just a little obsessed and I remember my BFF and I laughing for hours on end at all of the shenanigans. The Lunch Lady song was perhaps the most memorable sketch of all (though my preppy self got quite a few laughs from The Gap Girls too). After 1994, sloppy joes were forever associated with this sketch for me.

I was never much of a fan of sloppy joes back when I was a kid. The thing is that to me sloppy joe = Manwich and there was something about it that grossed me out (I honestly don’t think I’ve ever had Manwich, so it may be delicious, but as a child I was seriously grossed out by it.). My grandmother would have never even considered using Manwich, but somehow it didn’t matter to me. I flat-out refused to eat them until I was an adult. At my first teaching job, lunches were provided to us and sloppy joes were on the menu regularly….and that’s when I figured out that I actually do like sloppy joes.

When I discovered my great-grandmother’s recipe file in my basement (where it had been hidden away for 12 years) I found my grandmother’s easy sloppy joes recipe. Like everything else that my grandmother ever made, her sloppy joes were indeed delicious, but perhaps even better was the fact that they took less than twenty minutes to assemble, start to finish (I’ve also discovered that for burgers and messy sandwiches like this, homemade buns just aren’t usually soft enough for the job, so I’ve conceded that sometimes it’s okay to buy them. I love potato rolls, which are soft but not mushy.). For someone who thinks of a dinner that takes an hour to make as “quick”, that was quite a big deal.

I’ll be making these easy sloppy joes…a lot. And suggest you start too. 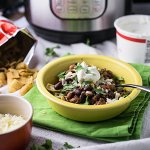 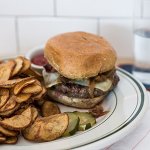