Dominica’s Caribbean Kitchen is a restaurant in Hixson, Tennessee, serving fresh and delicious Caribbean cuisine in a friendly environment.

A few months ago, I met my friend Becky (who writes A Calculated Whisk) at Noodle & Pho for dinner. As I climbed out of the car, I noticed something new a few doors down: Dominica’s Caribbean Kitchen. My interest was piqued, but a little Facebook research revealed that it wasn’t open just yet. A couple of weeks later, it was open, and people have been mentioning to me that I need to go and write a review ever since.

I like to give new restaurants a couple of months to get their bearings before I check them out, so I just now got around to going. Actually, I was going to go a few weeks ago…and found out that they are not open on Monday. Oops. That’s okay. We went for dinner on a Wednesday, and since we arrived at 5:30, there was only one other table occupied (several others filled while we were dining). We were quickly seated by Dominica (pronounced Dominique-a) herself and our server, Cassara, quickly got us our waters.

We perused the menu for a few minutes considering appetizers. I knew that the jerk items would be too spicy for me, so we considered getting the shrimp fritters. Philip then mentioned that he wished that they had the Jamaican patty on the dinner menu, as he had the Jamaican patty meal when he ate lunch there with a friend and really liked it. Well, the Jamaican patty is on the appetizer menu, so I suggested that we order that for $3.99. Now, a Jamaican patty is not just a patty of meat…it’s spicy ground beef wrapped in a flaky pastry. Dominica’s serves theirs with a slightly spicy chicken au jus. It was quite good, just a little bit spicy but definitely not overly so.

I decided on the coconut shrimp ($13.99) with rice and peas and fried plantains (you choose your own two sides) for my entree. The coconut shrimp was coated with slightly sweet shredded coconut and fried to a perfect golden brown crisp, and it was absolutely delicious. The mango sauce that it was served with was sweet and spicy – the perfect complement to the shrimp. The “peas” in the rice and peas were actually kidney beans. The rice was well cooked and could have used maybe just a touch more salt, but was still good. I was expecting crispier plantains – these were more sautéed than fried. They were tasty, but definitely had a more banana-like texture, so if you don’t care for that, order a different side.

Philip decided to get the West Indies Style Curried Chicken – Tender chicken simmered in a light curry sauce with diced potatoes and fresh bell peppers, served on a bed of steamed rice with grilled island flat bread ($12.99). It was not very spicy, but Dominica mentioned to us that they have toned down the spice a little bit for the Hixson crowd. They do have a spicy bottled sauce (Calypso sauce) on the table for those who would prefer a spicier version, but Philip thought that it took away from the flavors of the curry itself. He really loved the flavors of the curry, which he ate on the flatbread, which was simple but tasty and flaky. He did not care for the plantains (see my note about the texture above).

Our server, Cassara, and Dominica were both friendly and attentive. The restaurant decor is simple but the place is clean and well-kept. The service was very quick and the food was tasty and seemed fresh. The price was a little bit more than I expected but I did not think it was exorbitant, and I love that there’s another option for something a little unusual in Hixson.

If you’re looking for something different, try Dominica’s Caribbean Kitchen! 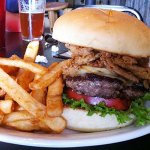 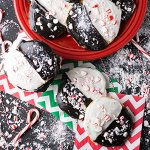