The Daily Ration is a new restaurant in the North Shore/River View area of Chattanooga that serves breakfast, lunch, and, on the weekends, dinner.

A few months ago, news broke that the popular breakfast/lunch spot The Farmer’s Daughter would be shutting down as the owners moved on to other things. In its place, Bitter Alibi owners Matt Skudlarek and Jason Bowers would be opening a restaurant with the same hours and similar offerings, thus furthering their quest to take over Chattanooga (just kidding!). I saw a lot of people expressing distress on social media, not so much over the coming restaurant but over the closing of one of their favorite dining destinations.

I was pretty excited, though. I love The Bitter Alibi and had a feeling that these guys would bring the same awesomeness to this location (for the record, I loved The Farmer’s Daughter, too, but had no apprehension about Matt and Jason carrying on the great food and atmosphere). It didn’t take long for them to get the place up and running, but then, The Farmer’s Daughter was a fairly new restaurant, so I guess there wasn’t a lot of work to be done, at least as far as getting the space ready for diners.

We dropped in around lunch time on a Wednesday. There were several tables occupied but we didn’t have any trouble finding a table. Menus adorn the tables and a drink menu sits right in the middle. The space is open and airy, with lots of wood and a coffee bar to serve those who come in bleary-eyed and in need of caffeine (they serve Velo coffee, so I was certainly tempted, but talked myself out of a coffee soda or iced coffee).

The Daily Ration menu is small (both in physical size and in number of offerings), with 12 breakfast items on the front and 7 sandwiches, a handful of sides, and several a la carte items on the back. The items on the menu seemed like sort of a mix of the items offered on The Bitter Alibi’s brunch menu and the items offered by The Farmer’s Daughter. Corned beef hash, ham and eggs, a DIY omelette, and avocado toast were just a few of the items available on the breakfast menu. The sandwich menu included a nod to the Bitter Alibi (The Bitter Alibi burger), a pimento cheese sandwich, a traditional Reuben, and a beet Reuben, which the lady at the table next to us was eating. It was very…beety.

The belly BLT, with tomato jam, Bibb lettuce, and aioli on a challah bun, was almost too much for me to bear, but in the end I decided to go a little less traditional and ordered the Asian breakfast bowl. At $10, the Asian breakfast bowl starts with a base of white rice. The rice is topped with glazed pork belly (you can also choose tofu), house kimchi (which I got on the side), pickles, sesame seeds, and a soft boiled egg. This was a very well balanced dish, with the sweet stickiness of the glaze on the melt-in-your-mouth pork, the intense spiciness of the kimchi, the chewy rice, and the ooziness of the egg (which was actually a hair past soft-boiled), plus the sour bite of the thinly sliced pickles, which are also house made. It’s difficult to go wrong with pork belly (I mean really!) and everything in this bowl worked fabulously together.

It’s difficult for Philip to pass up a good pancake, so as soon as he saw that their flapjacks ($7)were served with Bourbon maple syrup, his mind was made up. He added two eggs ($3), scrambled, and an order of bacon ($3) to round out his breakfast (well, brunch, since it was almost noon). The two buttermilk pancakes were huge, sprinkled with powdered sugar. They were soft, sweet but just a little salty, and tangy from the buttermilk. The maple syrup had just a hint of Bourbon flavor that amped up the interest factor a bit. The bacon was cooked well – crispy and chewy, as bacon should be – and the eggs were scrambled nicely, not overcooked or dried out.

One of Philip’s friends went with us, and he ordered Granny’s chicken salad sandwich ($10). The chicken salad is made with mayonnaise, celery, and grapes and is served with lettuce and tomato on a challah bun. Sandwiches are served with your choice of side; he chose the kale salad, which was tossed in a vinaigrette and sprinkled with tomatoes and cheese. Now, I don’t know this friend well enough to eat off of his plate like Brian who went to Two Ten Jack with us, but I did take a picture of his food and interrogate him about it in the car (that’s just what you get when you dine out with me). He said that the chicken salad had a good amount of mayonnaise – not dry but not heavy – and that the flavors were good. He told me that he really enjoyed the kale salad.

The Daily Ration is not The Farmer’s Daughter. The vibe isn’t the same, and I don’t really know how to describe how they are different. It’s not a bad thing that they are different, they’re just different. The food was just as good as any that I had at The Farmer’s Daughter. I read a couple of negative comments from Yelpers about service here (and one about butter – ha!) but you have to remember that The Daily Ration is still in its infancy and the servers are still getting their sea legs and learning the menu. Our server, Charlie, was awesome – friendly, helpful, and attentive. Our total for my breakfast bowl and Philip’s flapjacks, bacon, and eggs was $23.90 pre-tip. I would consider The Daily Ration’s prices to be on par with similar restaurants in this area of town.

If you’re looking for a new place in Chattanooga for breakfast/lunch (or dinner Thursday – Saturday) check out The Daily Ration!

Easy Coconut Shrimp in the Oven 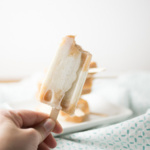