Crispy flour tortilla tacos take me back to my childhood, when I ALWAYS ordered Taco Light on family trips to Taco Bell. Winning!

Save this recipe for later!

When I was a kid, Taco Bell was sort of like an exotic version of fast food. That was back before there was a McDonald’s on every corner and Taco Bells were pretty scarce. I mean, I’m sure that there were more Taco Bells in the greater Chattanooga area than I realized, but as far as I knew there were only two.

On Saturdays, I always went to the bowling alley with my grandparents to watch my uncle Bobby with his Special Olympics bowling team. Afterward, we’d stop at the Taco Bell for lunch. Every time we went, I ordered the same thing: Taco Light.

I don’t actually know when Taco Light was discontinued. I remember, though, going in and not seeing it on the menu. I was terribly disappointed and had to move on to something else. I never forget about the Taco Light, though. It was larger than a regular taco, double the meat plus cheese, sour cream, lettuce, and tomatoes. Those were not the things that were important to me, though.

What I cared about was the shell. Taco lights = crispy flour tortilla tacos. The shell was basically a taco-shaped version of the taco salad bowl. Per.Fec.Tion. Adult me had to figure out how to make them myself.
Frying a flour tortilla taco shell is not quite as easy as you might think. I had a few go-rounds when I was first testing this dish. All you need is some shallow oil, a pair of tongs, and a steady hand. To keep them from closing up too tightly for me to get the toppings in, I stuff paper towels in the shells while I finished frying.

I’ll be honest. These crispy flour tortilla tacos are not exactly Taco Light. The texture is a little different. I am sure that was some sort of magical food engineering sorcery. They’re close enough to perfect for me.

Shared on Meal Plan Monday on Southern Plate and The Weekend Potluck on The Country Cook! 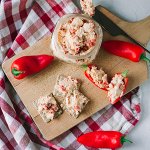 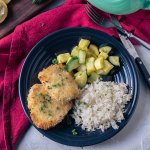