The South got major severe weather yesterday…all day long….but somehow in the midst of listening to the news for tornado warnings and deciding if it was necessary to hang out in the basement I managed to whip up this deliciousness.

I know, I know.  It seems a little crazy.  A big storm blew in as I rushed to get the last bit of crepe (pronounced crehp, like step, not crayp, like shape) batter into the pan.  I probably should have pulled out some bread and ham and cheese slices and called it a day, but I had a pound and a half of organic (i.e. not cheap) chicken thighs that were about to be “out of date” so I felt the need to go for the gusto.

My aunt works at a Sur la Table in Houston and they have cooking classes.  When I was there a three weeks ago for my cousin’s wedding she gave me a stack of recipes from said cooking classes.  This is a recipe from their crepe class.  Before I go on with this recipe, let me say a couple of things: 1) I have never made crepes before; (2) I have eaten crepes exactly once before.  Almost 10 years ago.  On my honeymoon.  In an IHOP.  Don’t order crepes at IHOP.  It will make you think that they are horrible, disgusting, and inedible pieces of rubber.  Rookie mistake.  And finally, (3) I assumed that crepes were ridiculously difficult to make.  They are not.

I apologize that all I have is one terrible photo of a filled crepe.  I had a few other things on my mind as I was making these….but as I was eating them I decided that they were too tasty not to share, so I snapped a quick, if bad, photo of one right before I inhaled it.

To make the crepe batter: In a medium bowl, whisk together one cup of whole milk (at room temperature), 4 eggs (also at room temperature), and a tablespoon of melted butter, cooled slightly.  All of my ingredients were in the refrigerator 10 minutes before I started the recipe.  I put the eggs in a bowl of hot water for 10 minutes and put the measuring cup of milk into a larger measuring cup half full of hot water, also for 10 minutes.  I actually did all of my liquid mixing in the larger measuring cup.  In a large bowl, whisk together 1 cups of all-purpose flour and 1 teaspoon kosher salt.  Pour liquid ingredients into dry and mix (carefully!  I got flour everywhere) until a smooth batter forms.  Getting the mixture smooth will take a few minutes.  Set aside to rest for 30 minutes to 2 hours.

For the filling, melt 1 T. unsalted butter in 2 T. olive oil in a large pan over medium heat (note that I did not say this was a low-fat recipe!).  Add 1 small shallot, finely minced, and cook for 3-4 minutes, stirring frequently, until soft.  One of my biggest flaws as a cook is that I frequently do not thoroughly read recipes before going to the store.  I did not have a shallot.  I did, however, have leeks as this recipe is actually supposed to include frizzled leeks (leeks fried in oil) and I just did not feel like fooling with all that….so I minced up a leek and used it.  You could use about 1/4 of an onion in a pinch.  The flavor would be a little stronger but still tasty.  Add in 2 minced garlic cloves and cook for about 30 seconds.  I used my garlic press.  I love that thing.  The recipe actually calls for the garlic to be added in at the same time as the shallot but in my experience it is IMPOSSIBLE to keep garlic from burning when it cooks for that long.

Next, add in 1 1/2 lbs. chicken thighs, cut into 1-inch pieces.  Cook, stirring every minute or so, for about 6-8 minutes or until chicken is golden, then add in 4 oz. cremini (baby portobello) mushrooms, sliced about 1/8 inch thick, and cook for about 3-4 more minutes.  The recipes actually calls for a tablespoon of chopped fresh thyme to go in with the mushrooms, but I forgot to buy that too.  If you are cooking on a gas flame, turn the heat off and add in 1/2 cup dry white wine (I use Chardonnay) and 1 cup heavy cream (again, I never said it was light.  I only said it was tasty).  Turn the heat up to high and bring it to a good boil, then turn it to medium and cook until the sauce reduces and thickens, about 6-8 minutes.  Salt and pepper to taste, and keep warm over low heat.

To make the crepes, heat a crepe pan or 8″ nonstick skillet (that’s what I used-I don’t think I would even know where to buy a crepe pan) over medium-high heat.  Brush lightly with melted butter and use a ladle to pour in enough batter to coat the bottom of the pan.  You will have to swirl the pan to coat.  Allow to cook until set-this took about 45 seconds in my pan-and then flip.  I used an offset spatula for this, but you could use tongs or a spatula.  Cook for another 30 seconds or so.  Stack the crepes together in a towel until you are ready to use them.  I ended up turning the heat down to medium after a few crepes.

When you are ready to eat, fill each crepe with about 1/3 cup of chicken mixture and roll up the sides.  This is restaurant food.  So, so good!  Oh, and after we were done with dinner, we spread some crepes with hazelnut-vanilla spread (like Nutella, but with a vanilla swirl), rolled them up, and sprinkled powdered sugar on top.  That was a good idea. 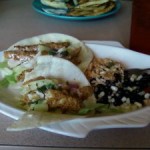