Cornbread panzanella is a jazzed up version of cornbread salad, an old Southern favorite, that combines the fresh tastes of summer with crispy Southern cornbread.

In case you don’t know, panzanella is bread salad. So I’m just being all fancy when I call this cornbread salad panzanella instead of calling it what it is-cornbread salad. Forgive me for being a fancy-pants, won’t you? Anyway, I love cornbread salad, which is usually a layered affair with cornbread (obvs), tomatoes, corn, onions of some type, often some sort of bean, and a creamy dressing.

Sometimes, though, those traditional cornbread salads end up feeling a little heavy for me. The dressing makes the cornbread a bit mushy and everything starts to seem a little…wet? Is that the word I’m looking for? I think it is. I realize that’s kind of the effect that dressing is supposed to have, but at times it ends up being a bit of a turn-off for me.

Then I read Deb Perelman’s recipe for corn bread salad on Smitten Kitchen (Deb and I could have a serious discussion about whether cornbread is one word or two). Heavy on greenery and with toasted cornbread croutons, Deb’s salad was tossed a little more lightly with dressing and was just a little lighter than the cornbread salads I’d known. I was immediately smitten (see what I did there???).

For my cornbread panzanella, I decided to include a lot of the components of traditional cornbread salad with a bit of a lighter approach…lots of greenery, perfect summer tomatoes, corn, some cheese, thinly sliced green onions, and a light ranch dressing. Oh, and cornbread, of course….unsweetened, of course, because in my opinion cornbread is not Southern if it has sugar in it. Give this cornbread panzanella a try and tell me what you think!

For Cornbread
For quick blender ranch dressing
For the salad

Most of the prep for this recipe occurs during the time that the cornbread cubes are drying in the oven, so don't let the long cook time scare you! It's mostly inactive. This recipe can be served as a main dish or as a side dish.

7.8.1.2
108
https://chattavore.com/cornbread-panzanella/
Click here to print the recipe for cornbread panzanella! 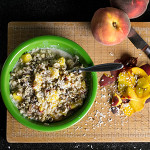 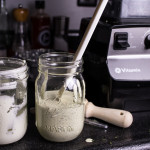