Several months back, as I was driving from work to the farmers market by way of Market Street, I looked over and noticed a “coming soon” restaurant in the space that was the original Market Street Tavern: Community Pie.  How odd, I thought, that another pie place would come in across the street from Fork & Pie Bar…then I realized that the word “pie” was in reference to pizza pies.  Neapolitan pies, to be exact. And gelato.

And I swooned.  Because gelato is the stuff of my dreams.

I waited a good long while to hear that Community Pie had opened, then another drive-by had me thinking the whole thing had fallen through…but then Emily Rose, another Chattanooga blogger, wrote about them on her blog and a bunch of other people started mentioning them and then I realized I had totally missed something.

Don’t these restaurants know they’re supposed to alert me of their openings?

Anyway, I’ve been really dying to go there for at least two weeks now, so when we set out today with no real plan for lunch it seemed like a golden opportunity I would be a fool to pass up.  The weather was very nice, which helped because we like to park not too close and walk.  Walking between the buildings downtown is like walking in an Arctic wind tunnel on a cold day.  The place was crowded but we were still seated immediately.  We were struck by the decor….they opened up the space (which was sectioned into three or four rooms before) and really did it up, with gorgeous gray ceilings, painted brick walls (of which I completely forgot to take a photo) and cool light fixtures.  Even the restrooms were interesting (if a little different from the rest of the joint)  with graffiti painted on the walls.

The front side of the menu consists of appetizers (such as Kobe meatballs, fried cheese, and tomato soup & grilled cheese), toast (toasted open-faced Niedlov’s bread topped with homemade goodies & artisinal charcuterie), and salads.  Despite the fact that I had heard very flattering things about the kale salad, I figured I’d blogged enough about kale salad this week plus Philip likes arugula more than kale, so we decided on the arugula salad (with pine nuts, Pecorino Romano, cracked black pepper, and lemon vinaigrette).  We also decided on the truffled egg & speck toast (speck is an Italian ham).  We strongly considered the creamy mushroom toast but ultimately decided to order the one that was topped with the smoky pork product-big surprise, right?

The arugula salad was very fresh (no wilted pieces-rare indeed!).  The Romano cheese was shaved, not grated, on top and it was very strong….the perfect complement to the peppery greens.  I love love loved the lemon vinaigrette…very lemony indeed but not off-putting, seasoned perfectly.  The toast?  Wow.  I wasn’t really sure what to expect, but I was not disappointed.  The toast was very crunchy and topped with a couple of slices of ham and a gigantic scoop of truffled egg salad on each half, garnished with chopped dill.  The only thing that was a little difficult was biting through the generous amount of ham with my teeth…but this is not a bad thing.  I must crack the code for the truffled egg salad (and perhaps the lemon vinaigrette too!).

While many of the pizzas sounded amazing (pork confit? duck confit? roasted mushroom?), we zeroed in on three in particular: sweet fig (prosciutto, gorgonzola, kalamata olives, goat gouda, homemade fig preserves, arugula, extra virgin olive oil and sea salt); carbonara (pancetta, green onion, black pepper, mascarpone cream sauce, fresh mozzarella, extra virgin olive oil, sea salt and egg); and Nueske’s bacon (fingerling potatoes, thyme, caramelized onions, fontina, Tilamook sharp white cheddar, arugula, extra virgin olive oil and sea salt).  After a short deliberation, we settled on the Nueske’s bacon pizza.  The pizza arrived without the arugula, but Tripp, our server, was quick to bring out a plate of it for us to throw on the pizza.  It was good without the arugula, but there is just something about a pizza topped with arugula that is hard to beat.  The crust was charred from the pizza oven.  It was thin but chewy, which is a rare quality in a pizza and everything on it was perfectly cooked with the toppings proportioned just right.  Also, I’ve read a few Urbanspoon reviews complaining that the middle of the pizza was too soggy, but with some research found several websites that stated that Neapolitan pizza often does have this slight sog to the middle.  While it wasn’t super-crisp, I didn’t find it to be “soggy” or “soupy” but delicious!

Of course, as I mentioned at the beginning, I am a gelato-phile so there was no question that I would be sampling some Milk & Honey gelato (Milk & Honey is owned by the same company that owns Community Pie-more on that in a minute).  Some of the offerings today (they change frequently) were the signature milk & honey, lavender & honey, chocolate macaroon, a vanilla with chocolate chunks (I can’t remember the name!), pear sorbet, and celery-ginger.  I decided on the lavender & honey (I have a weakness for lavender-flavored things) while Philip decided to get milk & honey and chocolate macaroon (you can get up to three flavors in one of the 4-ounce servings).  The milk & honey flavor was very simple and clean-tasting; the chocolate macaroon sweet but not cloying, chocolately but not bitter, and with just the right amount of coconut flavor.  The lavender & honey?  It made my eyes roll back into my head.  Perfect.  Just perfect….the lavender was strong and the texture and sweetness just right.  I practically licked the dish clean.  By the way, if you were wondering….gelato is a sort of Italian ice cream.  It has a lower butterfat content than ice cream because the proportion of milk to cream is higher, and it is denser because less air is whipped into it.

Tripp, our server, was very attentive and friendly.  He checked back on us several times and was quick to take care of anything that we needed (e.g. the arugula!).  I asked him who owned the restaurant and he told me that it is owned by Taylor & Mike Monen, who also own Taco Mamacita and Urban Stack Burger Lounge.  They will be opening an official storefront for Milk & Honey soon, selling gelato, popsicles, and other confections.  Exciting!

I won’t lie, this was a little pricier than your typical pizza experience-our total was about $35 before tip.  I was very happy with the food, the service, and the atmosphere, though, and, as you well know, I don’t mind paying a little more for those things.  It’s not like we eat out every day!  I highly recommend Community Pie! 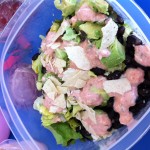 Kale Salad & What I Had for Lunch This Week 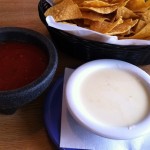