There are many things about my job that I would consider rewarding, with seeing the children make boundless progress over the course of one short school year being, of course, not the smallest reward. While I definitely don’t do my job for the gifts that I get, I was not sad to open this box at my class Christmas party:

The Bread Basket is a locally-owned bakery with locations on Signal Mountain, in East Brainerd, and in Cleveland (my assistant tells me that there used to be one in Hixson, and I can’t remember it for the life of me. They’re on my “list” of places to write about, but it seems that every time I think about it it’s almost closing time (they close at 3:00 on Saturdays). The Bread Basket sells specialty breads, muffins, cakes, cookies, and bar cookies as well as trays and gift boxes.

While the sourdough bread is patiently awaiting me in the freezer, I tore into that apple-cinnamon loaf at 11:30 that night (as I prepared to observe the pre-surgery after-midnight fast). Over the next few days Philip and I ate almost the entire delicious loaf, mostly slathered with butter, liberally sprinkled with cinnamon-sugar (that’s what is in the jar between the loaves), and broiled. We share the same philosophy about cinnamon toast: every centimeter must be covered with butter and cinnamon sugar, broiled until the sugar forms a candy-like crust. We could almost break the layer of cinnamon sugar off in a sheet. It’s a perfect coupling (me + Philip, cinnamon sugar + butter). The apple-cinnamon topping and the sweet glaze just adds to the perfection of the treat.

When we got down to the last third of the bread, Philip was struck with the idea that it would work well in a French toast casserole akin to the eggnog French toast casserole I made a while back. I agreed. Instead of cooking it in the Crock-pot, though, I decided to bake it, riffing on a recipe that I read in The Smitten Kitchen cookbook. The most important part of this recipe? Wait for it…..

That’s right. I spread all those slices of bread with butter. Sprinkled them with cinnamon-sugar. Broiled them till a sugar crust formed on top. Only then did I arrange them in the baking dish, cover them with custard, and bake them until all that lovely, creamy egginess was soaked up in the bread, perfect for drizzling with maple syrup (grade B, of course). Unlike the Crock-pot variety, the baked version is more chewy, crunchy on top from the cinnamon-sugar sprinkle. Perfection on a plate. Seriously.

Please note….I cook for two people, so the recipe that I’ve written below is larger than the one pictured (I halved the recipe…feel free to do so as well).

The 30-minute prep time includes 15 minutes of inactive prep for the bread to soak in the custard. 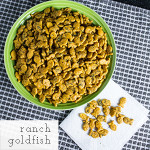