One of my very favorite restaurants anywhere is Calhoun’s, owned by Copper Cellar Restaurants, a small chain with a variety of restaurants based in Knoxville.  While Calhoun’s has locations in Knoxville, Nashville, Lenoir City, and Pigeon Forge, Philip and I love to visit the Gatlinburg location, which gives us the perfect excuse to spend a weekend in a kitschy town fighting crowds and people-watching.  We’ve been going here for ten years (the first time we visited was on the last stop of our mega-road-trip honeymoon) and we aren’t about to stop anytime soon.

One tip to know when you are visiting Calhoun’s Gatlinburg is that you should arrive early.  We usually eat breakfast, skip lunch, and eat a super-early dinner in order to avoid a wait, then we eat a snack later in the evening.  We arrived at Calhoun’s at around 3 p.m. and got seated immediately.  Our server, Ronni, quickly took our drink order while we perused the menu.

I have had several different menu items at Calhoun’s, including their chicken fingers (fantastic), Southern Salad (yum), and burger (perfection).  They are known for their barbecue, and a bottle of their “famous sauce” sits on every table.  The sauce tastes great, but something in it always gives me a terrible stomachache, so I can’t eat it any more (I used to order the Steak Calhoun, which is basted in the BBQ sauce, and it was always bad news).  I’ve never, ever had a meal here that I didn’t enjoy, but if you ask me (and Philip) nothing beats the steaks.  I always order the Ale steak, a 10 oz. sirloin, marinated in olive oil, mustard, garlic and Calhoun’s Cherokee Red Ale, topped with Worcestershire butter (Copper Cellar also owns a microbrewery and Calhoun’s sells a variety of microbrewed beers).

Philip used to order the filet, but after tasting my Ale steak a while back, he has taken to ordering it as well (it’s a few dollars less than the filet, which is always a plus).  Steaks come with mashed potatoes (although we always pay a little extra to get a loaded baked potato) and another side, and we also order a salad for $3 extra.  I always get the house salad with Ranch dressing, and Philip orders the Caesar.  As his extra side, Philip ordered “Tennessee Corn Puddin'”, and I ordered Spinach Maria, which is really just a slightly spicy parmesan creamed spinach.

Once you order at Calhoun’s, a basket of delicious bread makes its way out to you.  Usually, there are two French rolls, two White Lily biscuits, and a cornbread muffin.  Sadly, on this day, there was only one biscuit….but we probably didn’t need any more than that.  They’ll gladly replenish your bread basket if you ask, but again, we were trying not to totally overdo it.

I love Calhoun’s house salad, which is composed of mixed greens, diced tomatoes, chopped bacon, croutons, and shredded cheddar and Jack cheeses.  They used to put diced egg on it as well, which was very tasty.  I am a “fork dipper,” meaning that I dip my fork into my dressing before spearing my salad.  I feel like this allows me to really taste all the components of the salad while getting just enough dressing.  Delicious.

House Salad, ranch dressing on the side

Philip is a huge fan of Caesar salads, but he often has to ask for more dressing at Calhoun’s.  Not on this day.  The leaves were quite sufficiently coated with their Caesar dressing, very garlicky with plenty of red wine vinegar for tanginess.

We’re definitely medium-rare steak people.  As far as we are concerned, there is no other way to eat steak.  If you’ll take a look at the bottom picture, you’ll see that they definitely do medium-rare right.  By the time the steak arrives, the butter is completely melted, and the marinade provides the perfect seasoning for this delicious piece of meat.  The baked potato is, well, a loaded potato.  As far as I’m concerned, a steak without a baked potato isn’t a steak at all.  I love the Spinach Maria, which is creamy and cheesy with just a little bit of spice, I’m assuming from red pepper flakes.  Philip wasn’t a huge fan of the corn pudding…it was just okay.  He has ordered their broccoli before and really enjoyed it.

Medium-rare is the only way to eat steak!

We didn’t order dessert on this occasion…okay, we never order dessert with dinner…but we have gone here specifically for dessert and really liked it.  We were stuffed to the gills, though, and holding out to try a deep-fried Snickers bar on the strip later that evening.  We paid Ronni (who was very friendly and attentive) and set out to burn some calories.

We have inquired about the possibility of Calhoun’s coming to Chattanooga on several occasions and have been told that it’s never out of the realm of possibility and that the owner’s main rule is that he will not open a restaurant outside of Tennessee.  Help us start a crusade to open Calhoun’s in Chattanooga!  Of course, if one ever did open here, it would probably be so crowded all the time we would never go there and we’d still only eat at the one in Gatlinburg during our once-or-twice-a-year weekend getaways.  Whatever happens, I’m betting Calhoun’s will remain our favorite place to eat steak! 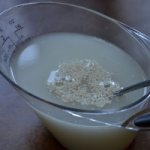 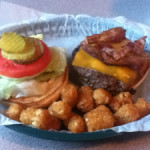