I’ve posted about Chattanooga Brewing Company before, but I didn’t have much to say because I don’t drink beer and at that time they didn’t serve food. However, last week a reader responded to one of my Facebook posts and told me that she’d eaten at the new CBC location and had some very tasty chicken tenders. Some of you may know that Philip recently started a blog, Path of Brews, to chronicle his journey into home brewing and post beer reviews. Seemed like a perfect opportunity for a great tag-team blog post to me, so we headed down to the new Chattanooga Brewing Company location (across from Finley Stadium and next door to the Chattanooga Jump Park) for a Saturday lunch.

First things first…there’s parking on the street or you can park in the big gravel lot behind the building, which is what we did. Of course, the first thing that we noticed was how gigantic the new location was in comparison to the previous location on Frazier Avenue, where there were maybe four tables. The new building has upstairs, downstairs, and outdoor seating and you just seat yourself. There were quite a few other people there, but still plenty of open seating. We picked a two-seat table by the downstairs windows. Our server, David, brought us each a beer list and a food menu.

Of course, I don’t care for beer, so I just had water. Philip decided on a 5-sample beer flight including Imperial Pilsner, S.A. IPA (infused with habaneros), Dunkel Vice, Winter Warmer, and Hefeweizen. I can’t tell you much more about that, but you can read his post on Path of Brews about our visit here.

Since my reader mentioned the Chickbock-battered chicken tenders, we decided to order those as an appetizer. There were three nicely browned, crisp-crusted tenders in the basket. The batter had quite a bit of spice to it, but not so much as to make it difficult to eat-instead it just added to the flavor. The tenders were perfectly cooked through and the honey mustard served on the side was a nice, cooling complement.

I had a hard time decided between the CBC burger and the Rivers sandwich (grilled sourdough with applewood bacon, lettuce, tomato, mayo, and balsamic Vidalia onion jam) but finally decided, since I’m trying to decide on my top ten burgers so I can update my list one of these days, to get the burger. With beer cheese for good measure. Since David told me that the waffle fries were not housemade (I asked) I decided to get house chips instead. The burger was good-sized but not grossly oversized, served on a fresh bun (Niedlov’s, I’m pretty sure) with lettuce, tomato, pickles, mayo, and the beer cheese. The portion of chips was basically gigantic. The chips were delicious and fresh, perfectly crispy and seasoned with salt and pepper. The burger was cooked just right with a great grilled flavor. The beer cheese had a great beer flavor (interestingly I do not like to drink beer but I like the way it tastes in food preparations).

Philip decided to try a stuffed pocket, AKA a homemade hot pocket. He had a hard time narrowing it down to one because he thought they all sounded good, but finally decided on the Hot Chick, with mozzarella, Buffalo chicken, blue cheese crumbles, and ranch dressing. It was all stuffed into a pizza-type dough. It was pretty messy because the ranch and buffalo kind of flowed out a little bit, so he had to use a fork for a lot of it. However, it was very tasty, with good seasoning and a nice balance of spiciness from the Buffalo sauce, creaminess from the ranch, and tanginess from the blue cheese. The dough was nicely crisp around the edges. Philip decided to get sweet potato waffle fries, which, while they may not be housemade, were well-cooked, crisp, hot, and tasty (particularly dipped into the honey mustard that I saved from the chicken tender basket).

In case you’re a new Chattavore reader, you should know that I’m pretty low-rent as far as my food preferences go. I love an upscale restaurant from time to time, but I definitely prefer bar food, burgers, and the like for an average meal out.

There isn’t a huge food selection here at Chattanooga Brewing Company, but there’s definitely something for everyone and the food has good flavor and does a great job of incorporating the house brews.

And if you like beer, you definitely need to go here for some great (so I’m told, anyway) local beer. The prices aren’t too bad either-for our appetizer, two entrees, and Philip’s flight, it was $31 and some change pre-tip. 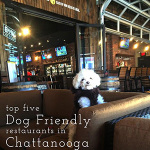 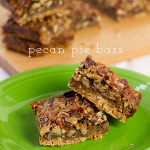