Groundhog Day brought snow to the Tennessee Valley!  Of course, for a teacher, snow on the weekend is a complete waste.  All it does is create roadway chaos and grocery store chaos, and, of course, since it was completely unexpected, I had practically nothing in the house to eat.  The snow covered the ground rapidly while we hung out on the couch after eating our breakfast, and momentarily we were unsure that we would be able to go anywhere.  Sometimes that gets a little dicey when you live at the bottom of a hill and both of your cars have manual transmissions.

Lucky for us, the temperature was in the upper twenties and the road never froze, at least not in our neighborhood.  We decided to head on out and started driving toward downtown, flipping through our Adventures in Dining coupon book to see if there was anywhere that caught our fancy.  There wasn’t, so no buy one get one free meals for us this week.  We decided instead to head to MLK for some Champy’s fried chicken.  My friend Matt, who started the Facebook Group Matt Eats Chatt a few years back, recommended Champy’s a while back, referencing their awesome fried chicken and the paper bag coozies for their beers. Hi-larious.  They actually have stickers that essentially say “chicken + 40 ouncers” = love.  I mean….that’s not what they say….but it is.  Oh, nevermind.  I should have taken a picture.  Anyway, there’s actually a Facebook group trying to get Guy Fieri to bring Diners, Drive-ins, & Dives to Chattanooga.  Does that show still come on?  I’m so out of the loop since we don’t have cable…

Driving across Veteran’s Bridge was a little sketchy…that is, it was completely frozen.  Luckily, the other motorists were equally as cautious as we were so we had no issues.  Champy’s was unexpectedly crowded for such a cold day with so much unexpected snow, but we were immediately seated in their covered and heated outdoor seating area (by the way, the place was pretty much packed out by the time we left).  Our server quickly took our drink order while we perused the appetizer menu and settled on pickled fried green tomatoes, which were delicious….lightly battered and sweet, salty, briny all at the same time.  They are served with Champy’s sauce, a slightly spicy horseradish and mayo sauce that was pretty benign at first but was burning just a little by the time our entrees came.  The tomatoes  were a little expensive-$8.75-but served in a very large portion.  I would definitely order them again.

I have actually eaten at Champy’s before, but when I eat lunch with coworkers I generally don’t whip out my phone and start taking pictures….so I didn’t blog about them.  Anyway, I had fried chicken when I ate there before and decided to order a salad this time (my coworkers ordered salads last time and they looked delicious!).  I decided on the fried chicken salad with both honey mustard and ranch dressings (they also offer blue cheese and Champy’s sauce).  I don’t usually order entree salads but this is no pansy salad.  It’s crispy romaine lettuce topped with mounds of chopped chicken tenders, a sliced boiled egg, halved grape tomatoes, red onions, chopped pickles, and shredded cheddar.  The hearty romaine stood up perfectly to the hot and crispy chicken tenders, and I especially love the ideas of chopped pickles on a salad.  I don’t think the dressings were housemade…in fact, I am such a honey mustard expert (I used to have a bit of an obsession) that I am quite certain that the honey mustard was Naturally Fresh, but they were still quite tasty.

Philip decided to get the two-piece dark meat plate, which comes with slaw, baked beans, and white bread to soak up the grease(!).  The chicken was perfectly hot, deliciously peppered and wonderfully crispy.  The beans were not overly mushy or overly sweet, seasoned just right.  Philip liked the slaw but (as usual) did not think that it was quite as good as Rib & Loin’s (no one’s ever is, Champy’s, so don’t feel bad!).

Champy’s is one of those places that “does one thing and does it well”.  You know those are my favorites.  They don’t bother to venture too far out of the realm of fried chicken….they serve wings and lots of fried appetizers (but their Mississippi Delta homemade hot tamales are quite delicious….I tried them when I ate there before).  They also offer family meals and catering.  It’s quite a popular joint and with good reason.  We’ll definitely be back.  By the way, Champy’s is a chain of sorts but still qualifies for Chattavore blogability because they only have four locations (the other three are in Alabama) and from what I can tell they started in Chattanooga (in 2009).  Can anyone confirm or refute this for me?

Champy’s wing sauce…not too hot but burns a little bit. I almost ordered the buffalo chicken salad but was afraid it might be a bit much….I was probably right! 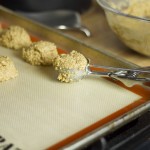