Have you tried any new restaurants off the beaten path lately? I don’t know if Dayton is really off the beaten path, but it’s definitely a little bit out of the way, at least the way we usually go. It’s nice to see new restaurants popping up in that area. Carrabelle’s opened up several months back, in the fall of 2016. I like to wait until restaurants have been open for a few months before I check them out, so a few few weeks ago we finally ventured north to check it out.

The full name for Carrabelle’s is Carrabelle’s Casual Café. Their website describes their cuisine as “low country Southern”. We arrived at about 4 p.m. to a fairly empty restaurant – several tables were occupied but there was no wait and our food came quickly. The building is new and the decor was pretty standard for a casual dining style restaurant.

While we checked out the menu, our server, Morgan, took our drink orders and brought our waters and Philip’s beer, from a Tennessee brewery that we had not heard of before (this doesn’t happen often – remember, he works in a bottle shop). We decided to order some fried green tomatoes ($6.99), battered and rolled in bacon and fried, served on top of grits with pimento cheese on top and a cup of Cajun mayonnaise. There was a lot going on there, but everything was very good. The grits were different from any grits I’ve ever had – they were dry, but somehow that wasn’t a bad thing. The tomatoes were crunchy and well-seasoned and the pimento cheese was melty. I liked the Cajun mayo a lot.

I was in the mood for chicken and biscuits, so it really didn’t take me any thought to choose my entree. I ordered the chicken and biscuits with a side of Cajun mashed potatoes ($10.99) but there is a “biscuit” section of the menu so I am not sure if this got rang up as “chicken and biscuits” or “chicken biscuits plus a side” because the chicken & biscuits were listed on my receipt separate from the side and the total cost was $10.49. Long story short, I don’t know if the entree version is served this way (chicken on the biscuits) or not, but that’s how I was planning to eat it so I was okay with it. The chicken was crispy and seemed freshly breaded, and the cheddar biscuits were tender and tasty. The gravy made a great dipping sauce. I liked the mashed potatoes, which were just a little bit spicy, but I will try a different side next time I go back.

Philip decided to go for the shrimp and grits ($14.99). These were not prepared in the style that he likes the best (grits cake and creamy sauce) but he said that they were very good. The grits were the same cheesy grits that were served with the fried green tomatoes. There was a reasonable amount of shrimp, bacon, and sausage, and it was served with a cheddar biscuit.

There were quite a few specials, most of them seafood dishes (most of the seafood dishes were listed on the specials menu). The menu was pretty standard for a southern style restaurant – fried chicken, shrimp & grits, chicken & waffles, several sandwiches and pasta dishes, etc. The prices were on par with other restaurants of similar quality. Our total for fried green tomatoes, chicken & biscuits plus a side, shrimp & grits, and one beer was $41.62 pre-tip). Our server, Morgan, was very friendly and attentive. The atmosphere was low-key and great for an early evening dinner date.

If you’re looking for a nice dinner in the Dayton, Tennessee area, check out Carrabelle’s Casual Café! 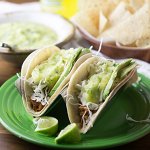 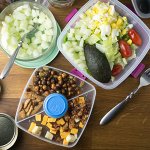