Café Roma is a Cleveland, Tennessee favorite, and after my braised pork shoulder dish…I understand why! It’s a great Italian option for lunch or dinner.

So, for those of you who were wondering after you read my post about Yesterday’s at Willie’s, we ended back at Scott’s Furniture in Cleveland to buy the first sofa that we liked. Go figure. I know you guys are very interested in my personal life. It arrives today. It’s the little things, you know.

Anyway, going to purchase our new sofa meant that we needed to go back to Cleveland, so we decided to eat at another restaurant up there. It’s kind of a trek for us, so we don’t get a lot of opportunities to go up there unless we plan it out. We were torn between two places that were both pretty close to the furniture store (and both pretty highly rated on Yelp!), Café Roma and Taco Shack. Since I hadn’t done a post about an Italian restaurant in a good long time, we decided to go with Café Roma.

Café Roma is located in downtown Cleveland, very close to the courthouse and to Lee University. Unlike downtown Chattanooga, downtown Cleveland offers free two-hour parking on the street. I think I’ll move there (not really, but how nice!). We arrived around 1 p.m. and there were only a couple of other tables occupied, so we were seated immediately. Our server, Whitney, filled our water glasses and brought Philip a drink menu while we perused the lunch menu. They had a fairly small beer selection, but Philip decided on the Rogue Hazelnut brown ale and was very happy with it. I was intrigued by several of their cocktails but didn’t want to pay $8 or $9.

The night before we went, we watched In Defense of Food, a PBS documentary based on Michael Pollan‘s book by the same name (which you should read if you have not) (⬅️affiliate link). In the documentary, Pollan cut up crusty bread and piled it with fresh mozzarella, heirloom tomatoes, and basil, then drizzled it with olive oil and balsamic vinegar. This led to Philip and me agreeing that we needed to order the caprese-fresh mozzarella, tomatoes, basil, salt and pepper, olive oil, and balsamic reduction-from the antipasti menu. It was served to us with a couple of pieces of what Whitney referred to as their house bread, which was pretty focaccia-ish. The only minor issue that I had with the caprese was that the tomato really wasn’t the greatest, but that’s what you get when you order something with fresh tomatoes in December. I can accept that, especially since with the other ingredients you didn’t really notice that it was a winter tomato. I just love caprese. I resolve to make more caprese in 2016. Amen and amen.

As I was perusing Yelp!, I read the menu for Café Roma and knew instinctively what I would order: braised pork shoulder. The braised pork shoulder consisted of chunks of braised pork shoulder (you weren’t expecting that, were you?), butternut squash, roasted red pepper, spinach, and linguine in a sauce consisting of some of the braising liquid and a brown butter sage sauce. And it.was.wonderful. The pork was amazingly tender and seasoned beautifully, the butternut squash was cooked well, and the roasted red peppers were actually roasted (I hate when you get a roasted red pepper that still has crunch to it). I would have liked to have tasted the sage a little more in the sauce, but it was still delicious, if a bit messy. That was only because my sorry self cannot twirl noodles for peanuts, so I ended up splashing broth all over the paper tablecloth like a two-year-old was sitting there. Oops. There was also a wedge of fresh focaccia served with the pasta.

Philip decided to go with the penne Bolognese, described as “penne pasta with a traditional rich meat sauce”. Bolognese sauce is traditionally a tomato sauce with meat (sometimes two or three types of meat) long-simmered with cream or milk added at the end. This sauce was more of an orange sauce than a red sauce, so it definitely had dairy added. It was a little bit spicy (probably red pepper) and didn’t have much in the way of chunks aside from the meat. Philip did say that he would have liked for it to have been a bit more meaty, but it was very good, very flavorful.

The prices are a bit higher for their dinner menu, but the lunch menu is very reasonably priced, with entrees and sandwiches ranging from $8.25 to $9.50 (they have a small selection of “dinner entrees” available for lunch priced from $12 to $19). Our total for Philip’s beer, the caprese ($8), my braised pork shoulder ($9.25), and Philip’s penne bolognese ($8.25) was $32.24. The atmosphere was very nice, with white tablecloths, fresh flowers on each table, and low lighting (and mouthwash in a St. Germain bottle in the ladies’ room-again, it’s the little things! Don’t worry, it had a pour spout and a stack of Dixie cups.) and Whitney was friendly and attentive. We enjoyed Café Roma very much and definitely recommend it for tasty Italian food!

This post contains an affiliate link. This means that if you click through and make a purchase, I will earn a small commission. This does not affect the price to you. For more information, please see my disclosures. Thank you for supporting my blog! 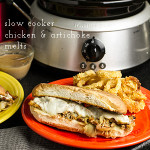 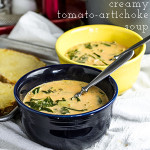