Back in November, when Philip and I went to Good Dog, we noticed a new restaurant on the north shore called Brewhaus. I am sure you won’t be surprised that it didn’t take long for us to figure out that it was a German restaurant-a German gastropub, the website calls it. We were immediately intrigued. When we were trying to decide where to eat with a couple of friends this weekend, Brewhaus came up and we decided to try it out.

We arrived at Brewhaus at 6:30ish. I wasn’t too sure how the seating worked when we walked in; there were no signs asking customers to wait to be seated. When a server walked by, I asked him how it worked and he told me that it was first-come, first-served. We grabbed the one empty table that we saw, out on the back porch, which was covered since it was only in the 50s and beginning to drizzle. When our friends came, one of them asked if the outdoor heater behind our table could be turned on, since the temperature was dropping. I’m not sure why, but it took us asking twice and another person asking as well before it was turned on. I am assuming it was just because they were pretty busy. Anyway, the heater made it nice and toasty….

Our server was also the bartender, and she was very helpful with suggestions. The menu consisted of appetizers, a handful of salads, sandwiches (mostly burgers), a hot-dog style brat, entrees, “side cars” (aka side dishes), a couple of desserts, and drinks (they have a variety of bottled beers-both German and otherwise-as well as an ever-changing selection of draft beers). After considering the fried pickles, Philip and I ordered a honey-bacon deviled egg appetizer. It was a fairly standard deviled egg topped with large pieces of bacon, with honey on the side for dipping. That’s right-honey. It seemed quite strange, as I am sure that it probably does to you….but oddly enough it really worked! Very tasty. I never would have thought of serving honey with deviled eggs! 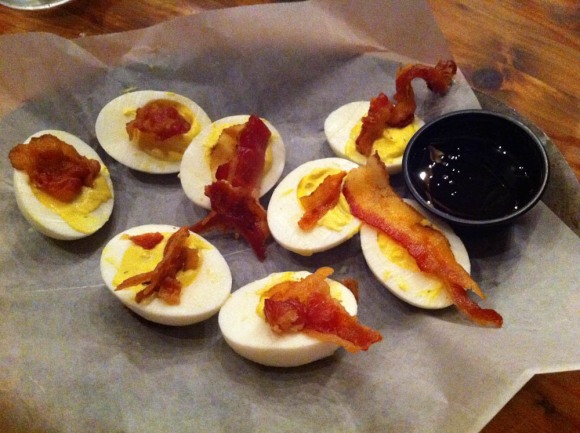 I had pretty much decided before I ever set foot in the restaurant what I was going to order: The Rooster Schnitzel Weiner Art (and you better believe I pronounced it “veener”, not “weiner”. I’m all about authenticity!). This is a pork loin cutlet, pounded thin, breaded, and fried (classic schnitzel) and topped with a fried egg. On the server’s recommendation, I ordered German potato salad and veggie medley. I really liked the schnitzel….the oozy fried egg yolk really made the whole thing. The egg was highly peppered, and if I order this again I will probably ask them to go a little light on the pepper. It just made it a little spicier than I would have liked. The crispy coating on the schnitzel was perfectly fried and the meat was not greasy. The veggies were good…carrots, broccoli, and snow peas, cooked till crisp-tender and lightly seasoned. However, I was not very happy with the German potato salad. German potato salad is served warm, which I like, and has a vinegary dressing, which I also like (I’ll post my potato salad recipe sometime), and it has bacon in it, which I like in theory….but my potato salad was pretty much just bacon. A big pile of limp bacon. I’m not sure what happened….maybe I got the last of the batch and ended up with the majority of the bacon? There were very few potatoes on my plate. I didn’t care too much for the dressing, either. It was just a little weird to me. Philip liked his, though, so don’t make your decision based on my opinion. Your experience might be better than mine. I should have ordered the spaetzle (more on that in a minute).

Philip decided on the Jäger Schnitzel Weiner Art-and no, it does not contain Jägermeister. It’s a classic schnitzel, as I described above, served with mushroom gravy on top. Philip decided to get German potato salad and spaetzle as his “side cars”. As I said above, he really liked his potato salad….but then, his was not just a gigantic pile of bacon. He did not care so much for the spaetzle, which is an egg noodle dish with a tiny bit of creamy sauce. I, on the other hand, really liked it and ate several bites of his. He loved the schnitzel and ate the whole thing.

At the end of the meal, I was a little bit sad that I was so full, because I wanted some of the Schwarzwälder Kirschtorte (aka black forest cake, aka chocolate cherry cake) from The Hot Chocolatier. No, no German chocolate cake-did you know that German chocolate cake is not actually German? It was named after Baker’s German’s Chocolate. See the useless knowledge you gain when you watch food television all the time? Black forest cake, on the other hand, is authentically German. Next time, I will be saving room for this!

Well, next time I visit Brewhaus, I will be skipping the potato salad…and probably the appetizer, just so I can replace it with dessert. There will be a next time, though. The atmosphere is really cool in this “gastropub”, and I liked most of the food. I encourage you to try it out, and don’t be afraid of the word schnitzel….or spaetzle…or Schwarzwälder Kirschtorte. This is a great local restaurant.

Brewhaus is located at 224 Frazier Avenue, Chattanooga, TN 37405. You can reach them at 423-531-8490 or info@brewhausbar.com.  Check out their website: http://brewhausbar.com.  You can also find them on Facebook and Twitter.