Bob’s Brick Oven is a small pizza joint in Rock Spring, Georgia that is on top of their game with homemade pizzas and ice cream plus great service!

A few months ago, I attended a cooking class that my friend Christy Jordan, who writes the blog Southern Plate, taught at AllSouth to be Christy’s kitchen assistant. Dave, one of the sales guys at AllSouth, lives in North Georgia and he gave me a couple of printouts before I left that day about North Georgia restaurants that I needed to write about.

One of those restaurants was Bob’s Brick Oven, serving pizza and ice cream. I had Bob’s Brick Oven on my “list” (I do have a literal list, a OneNote document that I am constantly adding to, divided up by areas of town) but had not heard anything about it from anyone who’d actually eaten there. Dave highly recommended it, so I made a mental note to move it to the top of the list.

It took a little bit to get there. We usually go on Saturday afternoons, and by the time Philip gets home at 3:00 or 3:30, we are usually pretty hangry and eager to get to our late lunch/early dinner ASAP. Last week, though, I was on fall break. We decided to go spend the day at Chickamauga Battlefield, which gave us an excuse to visit Bob’s Brick Oven for lunch.

We were a little confused when we got there. It’s located right next door to a small gas station (in the same building) and if you aren’t paying attention, you’ll miss it. We found it, though, and when we walked in at a few minutes till 12 there was only one other table occupied. A guy behind the counter told us to sit wherever we liked and our server (whose name, I hate to say, we didn’t catch) quickly brought our menus to us and took our drink order.

The first pie that we decided on was an 8-inch Picnic. The Picnic consists of a sweet barbecue based topped with whole-milk mozzarella, thinly sliced smoked pork loin, and a drizzle of tangy mustard-based Carolina BBQ sauce. The sourdough crust is thin and irregular, a sure sign that it’s been hand-shaped. The wood-burning pizza oven is clearly visible from the dining room in the open kitchen (right behind the counter) and the crusty char on the pizza makes it clear that these pizzas are fired in that oven. The pork is smoked out back and is smokey and tender, and the housemade barbecue sauces are a perfect finish.

For our second pizza, we were torn between the Primero Pesto, with a pesto base topped with mozzarella, red onions, and green peppers, or the Chicken Alfredo, with house Alfredo sauce as the base, house-smoked chicken, and a sprinkle of herbs. Our server told us that both were good but out of the two, the chicken Alfredo was her favorite, so we went for that. The chicken was absolutely amazing – smokey and tender like the pork – and paired better with the creamy Alfredo sauce than I would have ever imagined. Bob told us that there was also a touch of his homegrown basil in the Alfredo sauce as well (there is actually basil under lights in the dining room).

We also got a cup of Bob’s homemade root beer. I should have taken a picture of that, but I didn’t think to (by the way, I apologize for my awful iPhone photos here – I didn’t want to lug the camera to the Battlefield). The root beer was almost colorless, which just goes to show how much caramel color is in most store-bought root beer. It was strongly flavored and sweet. Bob told us that he also bottles it for delivery and take-out orders, so we of course had to take a bottle to go. Afraid to let it sit in the car for too long, we opened it and drank it while driving from stop to stop on the Chickamauga Battlefield driving tour, no doubt looking like we were doing something illegal as we sipped from a brown bottle while driving – through a national park, at that. Ha.

There was only one ice cream on the menu, as the restaurant had been closed for some updates to the paint and Bob had been out of town for a couple of days. However, since the flavor was coffee, we were all in and split a bowl of it. They crumble iced oatmeal cookies into their coffee ice cream, and Bob told us that the idea for that came from the fact that he liked to dip iced oatmeal cookies into his coffee. Makes sense to me. His coffee ice cream was delicious – creamy with a deep coffee flavor, a perfect texture, and not too sweet. The cookies were a great complement to the coffee flavor.

Our pre-tip total for two eight-inch pizzas, two root beers, and an ice cream was $22.47 – a great price for the quality of the food and the customer service.

We spent a good chunk of time talking to Bob when he stopped by our table to ask how we were enjoying our lunch. He told about how he got into the restaurant business and about his plans to expand. It was very clear that he is very passionate about his business and his customers, and as cheesy as it sounds, I was very inspired by our conversation.

If you want to go to a restaurant that’s all about good food and personal connections, Bob’s Brick Oven is your place. 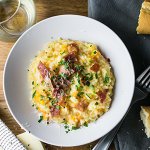 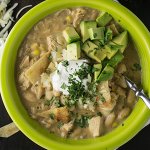