Bluewater Grille is a seafood restaurant located in downtown Chattanooga, within walking distance of the Tennessee Aquarium.

Let me start this by saying that this post is pushing it a little bit. Bluewater Grille is not a totally local restaurant. They are owned by the CraftWorks Restaurant & Brewery Group, which owns quite a few other restaurants around the U.S., including Big River Grille & Brewing Works. I am a little conflicted but since Chattanooga is the only location of Bluewater Grille I decided to go ahead with the post.

I’ve been wanting to go to Bluewater Grille for a couple of weeks now. The week before last I was struck with the urge for some sort of fish or shrimp dish, but as I mentioned in my Choo-Choo Barbecue post last week, we didn’t really want to risk downtown in the pouring rain on UTC graduation day….so we didn’t. Bluewater Grille opened in Chattanooga in 2006, and 2006 or 2007 was probably the last time that I’ve been (we’ve only been once). I recall liking the food when I went, but for whatever reason we just never went back.

When we walked up, we noticed that the patio seating was full up and we were a little concerned that we were not going to be seated quickly even at almost 2:00 p.m. on a Saturday. We needn’t have worried….I guess a lot of people were just eager to sit outside. We were offered the options of sitting in the cocktail area (where a Bloody Mary bar was set up….sorry if you’re an aficionado, but bleh) or in the dining area….we decided on the dining area and were seated at a table in the corner of the dining area. It was nice and quiet, a little away from everyone else, with fairly decent light for taking photos (I’m so tired of taking cell phone photos and trying to find a solution to this problem that doesn’t require me whipping out my gigantic DSLR at the table). We were given a regular menu and a brunch menu and Krystal, our server, took our drink order.

The brunch menu had some interesting items, including Grand Marnier (an orange-flavored liqueur) French toast, which sounded lovely, and shrimp Benedict, with grilled shrimp, poached eggs, and Hollandaise on an English muffin, as well as some more exotic items like crab cakes Benedict. I briefly considered getting the shrimp Benedict but then Philip said, “Eh. I’ve already had breakfast today,” and jolted me back into the reality that it was afternoon, I indeed did already have breakfast (biscuits & gravy!), and was really more in the mood for a lunch item. The menu included soups & salads, features (like Cajun fish tacos, grouper piccata, and sesame tuna), chicken & pasta, sandwiches (such as a crab BLT and a blackened Mahi Mahi sandwich), and lunch specialties. I managed to narrow my choices down to the lunch specialties, between the coconut shrimp & a wedge salad (iceberg wedge with blue cheese dressing, crumbled blue cheese, and bacon) and the fish & chips, served with malt vinegar mayonnaise. I asked Krystal if she would recommend one over the other and she said that she would order the fish & chips.

I decided to take her advice because more than once this week I was chomping at the bit to go to Hair of the Dog or Honest Pint for some fish & chips. It was a pretty straightforward dish, as fish & chips tends to be: three pieces of cod, battered (dipped in a liquidy batter before frying as opposed to being rolled in a bread crumb coating) as it should be, with hand-cut, skin on fries sprinkled with coarse salt. The fish was not greasy, which to me is the true hallmark of good battered fish. The fries might have been just a tad bit salty but that didn’t stop me from eating two-thirds of them. The malt vinegar mayonnaise was an interesting touch…a creamy dipping sauce with that smelly-foot tang that malt vinegar lends to everything it touches. I am not knocking malt vinegar…nay nay, I think that malt vinegar is essential to fish & chips and my BFF used to make fun of me as I doused my fish with it on our frequent trips to Captain D’s back in the day (I was a different person back then. Don’t judge me.). Fish & chips aren’t fish & chips without a potent splash of malt vinegar, and while this mayo definitely wasn’t traditional, it was strong and it was tasty. A nice touch.

Philip veered off the seafood path and decided to order the Kobe sliders with a house salad (with balsamic vinaigrette dressing). The sliders were pretty tiny, which made me laugh. They were pretty basic on what the menu touted as a “housemade bun”, no cheese, a mustard sauce, and pickles…though only one of Philip’s had a pickle. They were cooked nicely and had a good flavor. There was a pretty good portion of salad, which had mixed greens, tomato, cucumber (which Philip asked them to leave off), pepper jack & cheddar cheeses, bacon, and spiced candied pecans. The salad wasn’t drowned in dressing but everything was nicely coated and Philip didn’t feel that it had an overpowering flavor.

Our total was about $25 before tip. Krystal provided good service, checking back on us and keeping our water glasses filled. The atmosphere is nice, not too dark but not glaringly bright, with lots of wood and lovely light fixtures. I like that you can see what is going on in the kitchen. By the way, Bluewater offers a space for private parties and apparently has a pretty good happy hour (something I wouldn’t know anything about). We’ll try not to wait another six or seven years to go back….

Bluewater Grille is definitely a great place to go for seafood in the Chattanooga area.

Bluewater Grille is located at 224 Broad Street, Chattanooga, TN 37402. You can call them at 423-266-4200. You can check out their website, http://bluewaterchattanooga.com. You can also “like” them on Facebook. 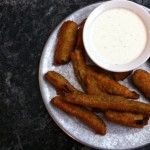 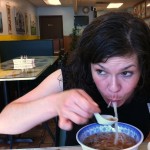