Sure, black bean sliders don’t taste anything like beef sliders, but that doesn’t mean that they aren’t delicious! They’re also easy and healthy.

I went through a phase-a pretty lengthy one-where I only ate meat a few times a week. I thought of myself as a “flexitarian” (someone who is mostly vegetarian but eats meat from time to time), though I didn’t really tell other people that. Because flexitarian seems a little less, I don’t know, credible than a vegetarian. Almost like it isn’t really a “thing”.

My reasons for eating this way were two-fold. Number one, my LDL cholesterol (that’s the bad kind) tended toward the slightly high end and I wondered if eating less meat might make my numbers drop (it did). Number two, I spent a lot of time watching food documentaries where I learned about the horrors of the commercial meat industry and eating mostly vegetarian was much cheaper than eating pastured meat all the time. That stuff is good but it isn’t cheap. Paying to eat with your conscience is a worthy cause but if you can’t afford it, well, you can’t afford it.
This totally sounds like I’m headed down a downer hole. I’m really not trying to. The thing is, I’ve realized that lately I’ve been eating more meat again. I don’t even know how it crept back up on me. And guess what? My cholesterol is back up (if anyone feels the need to point out the amount of dairy and eggs that I consume, don’t bother. I never stopped eating that stuff.). Oh, and another thing? I’m spending more money on groceries again. Even conventional meats are expensive.

What am I getting at? No, I’m not going vegetarian. I am, however, trying to be a little more conscious about how many times I eat meat every week. There are so many other great sources of protein that are less expensive. This is what works for me, so I’m going to see if I can get those numbers back down again.
That, my friends, is where black bean sliders come in. Anyone who has read my blog for a while knows that I have a problem with fake meat. Anything posing as a burger that anyone tries to say actually tastes like a burger…probably doesn’t taste like a burger. I remember someone telling me once in a grocery store freezer section that Boca Burgers tasted just like regular burgers. They don’t. Learn from my mistake.

Black bean burgers have never had that problem, though. No one ever claimed that black bean burgers actually tasted like beef burgers. That’s just why I like them. What do they taste like? Black beans. But I love black beans, so I’m totally fine with that. I love them in slider form…since they’re smaller, they cook up more quickly and get a nice crust on the outside. Paired with an easy cilantro-lime crema and topped with mozzarella cheese and avocado, they’re positively marvelous. Black bean sliders are perfect for lunch, dinner, or even as an appetizer for a party. And they’re super-quick and easy, too!

Try my black bean sliders with cilantro-lime cream for a quick, delicious dinner or appetizer!

The recipe for the black bean patties was adapted from My Recipes .

For the burgers
For the cilantro-lime cream 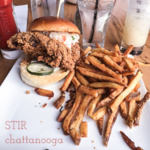 Stir Chattanooga at the Choo Choo 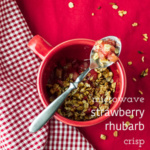