Fajitas scare me.  Not in the sense that I somehow think that some sort of harm is going to befall me if I order or eat fajitas, but still.  See, the thing about fajitas is that whenever I see someone else order them in a restaurant I always think they look, smell, and sound delicious (can something sound delicious?).  The seasoned meat, peppers, and onions sizzling on cast iron (they’re always served on some sort of specially made cast-iron something-or-other) are definitely alluring, but for some reason I just have this sixth sense that if I were to actually order fajitas in a restaurant, I’d end up sorely disappointed in whatever ended up on my plate.  Twelve dollars to be filled with regret.  No thanks.  So, for about fifteen dollars, here’s how to have (four servings of) chicken fajitas that will fill you with nothing but happiness….and you can make and eat them while wearing your jammies.

This recipe is adapted slightly from America’s Test Kitchen, which is one of my very, very favorite recipe sources.  Since we turned off our cable over a year ago, I’ve become quite the ATK addict and now I wonder how I got along all that time without them.  The good folks at America’s Test Kitchen take a recipe and pick it apart, choosing the best flavor combinations, the perfect cuts of meat, the right prep techniques…so on and so on.  They’ll teach you about chemical reactions and they’ll even tell you what the best brands of kitchen equipment and foods are to use to make your recipe.

For these fajitas, which turned out to be the best chicken fajitas I’ve ever eaten, I decided to modify their recipe only slightly, using more flavorful chicken thighs instead of boneless, skinless breasts.  I left out the pickled radishes since radishes are not always easy to come by in a suburban Tennessee grocery store in the dead of winter, and I added cheese and avocado because, well…..cheese and avocado.  Oh, and I forgot to mention something: while you’ll be lucky to get two meals out of your twelve dollar disappointment-inducing restaurant fajitas, my best chicken fajitas will make four meals for the average adult.

What are the best chicken fajitas you’ve ever had? You should definitely try my recipe!

This recipe is adapted slightly from America's Test Kitchen .

This recipe takes approximately an hour from start to finish. The prep and cook times listed are approximate.

Friday List: Websites to Help You with Your New Year’s Resolution 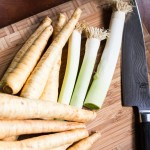