This beef stew with Guinness may not be as good as my grandmother’s, but it’s rich, warm, and comforting – and only takes one pot.

I’ll get to beef stew with Guinness in a minute…but first I want to explain something.  Sometimes I get frustrated with trying to “write” about food.  I am not a poet or a “creative” writer…I can’t spin a fictional story for you and I can’t spin a web of words about whatever subject and then somehow relate it to food.  It’s just not what I do…it’s not something I’ve ever been good at.  In fact, I rarely even read fiction.  My mind works in fact, in the here and now, in science (mostly food and behavior science) and math.  I can write about real things all day, but don’t ask me to tell you a story.

The problem is that I honestly don’t have tons of childhood memories that are food-based.  My mom is a good cook but didn’t really have a lot of “specialties”, and my grandmother had tons of specialties but I don’t have very many of her recipes.  I have a little binder of her recipes but several of the ones that I think of as “defining” recipes for her are not in it, and my dad’s sisters don’t have any of the ones that I’ve searched for.  Unfortunately, fourteen-year-old girls don’t usually have the forethought to write down their thoughts in real time or to spend time watching people cook or writing down their recipes (my grandmother was fiercely protective of her egg soufflé recipe but not really any others).

One thing that I can say is that when you eat someone’s cooking over and over you begin to think that the way that they make things is just the way they should be made.  It becomes difficult to eat them when they’re made in a different way, and sometimes even when they’re made in the same way by a different person.  My lasagna never tastes as good as my mom’s lasagna (ditto for my homemade burgers versus hers) and I can’t count the number of foods that my husband has come to expect to taste a certain way because of how I cook them at home.

My grandmother’s beef stew is one of those foods for me.  I know it seems mundane, an ordinary food like beef stew…something that most people just toss into a slow cooker before dashing out the door.  I won’t lie, I have done that many, many times.  Consequently, I got to a point where I gave up trying to make beef stew.  It never tasted like hers…never anything like hers.  Hers was perfect.  Thick brown gravy, not a watery broth, with large chunks of carrot and the potatoes quartered lengthwise, never into chunks.  The flavor of the beef is what I remember most vividly (and sadly, my taste memories are not very vivid, though I could tell you exactly where each family member sat at the table, where the stack of white bread that she served to sop up the gravy was located-and on what plate it was served-and that soups and stews were always eaten out of white bowls that my mother still has, set atop a dinner plate for placing your bread or crackers on).  She used a pressure cooker to make her beef stew, and the meat always had a wonderfully browned flavor-a flavor that I didn’t recognize back then, hence a few times that I’ve just thrown raw chunks of meat into my slow cooker (with not very tasty results).

Trying to recreate a recipe of which you have such high expectations is daunting.  I’ll never, ever make beef stew that tastes like what my grandmother made, because even if I had her recipe and followed it exactly it would never live up to my memories of it, which are probably heightened by the fact that I miss my grandmother dearly.  I’ll never recreate evenings at her dinner table…always served at 6:30 p.m. around their long dining room table with Peter Jennings reporting the evening news in the background.  I can’t recreate her recipe, but I have worked to create a recipe that honors the memory of her recipe.  This beef stew with Guinness is the closest I’ve come to beef stew that’s as good as hers.

I hope that this beef stew with Guinness makes you think of something special that someone special cooked for you. Comment below and tell me about a special food you remember.

1/3/15 Note: I made this beef stew last night with Belhaven Black Stout, which we bought at the Casual Pint, a new craft beer market on Cherokee Boulevard (next door to The Big Chill). Philip wrote a review of the stout on his blog, Path of Brews-click the Belhaven Black Stout link to read it. It made  great beef stew!

Other hearty soups on Chattavore: Goodness! I apparently have a thing for creamy, pureed soups, because that is what is featured almost exclusively here on my site. There is this slow-cooker vegetarian taco soup (a huge hit, by the way, and just like that other taco soup that has all the packets, except without the packets or the meat), and there’s this mushroom chili, which was a good idea but a bit ill-thought-out….I need to rework this recipe a bit.

This recipe is adapted from America's Test Kitchen .

I know that adding gelatin to the stew sounds weird, but it gives the broth body that could only otherwise be achieved by loooonnnnng simmering of marrow bones. This stew is even better on the second day. 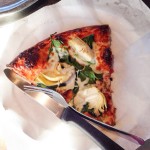