Baked brie with pecans and honey mustard is one of the easiest appetizers that you can make for entertaining, but it’s still elegant and delicious.

So, I’ll admit it. Forty is creeping up in the next couple of years and sometimes it feels really weird to admit that. It’s just that I really don’t feel all that different from how I felt when I was twenty, except when I stand up and my back tries to give out (I promise that doesn’t happen often). Plus, I remember a time when forty seemed old to me, and now…I’m almost there. I’m not old!

Most of the time, though, my age doesn’t bother me at all. I may not feel all that different than I did when I was twenty, but I am way more comfortable in my own skin than I was back then. I really don’t feel the need to do much of anything that I don’t want to do…starting with going out to celebrate New Year’s Eve.

Really, it’s not that I ever really did celebrate New Year’s with much gusto. I think the most exciting thing I ever did was go over to my cousins’ house where we rang in the New Year with sparkling grape juice. There was definitely a time when it seemed like I probably should go out, because going out is the cool thing to do…right?

I mean, if you want to go out, bully for you. Totally your prerogative. That’s not really my thing, though. Hanging out on the couch with some baked brie with pecans and honey mustard is really more my style. New Year’s Rocking Eve? Well, maybe. Honestly, it’s probably going to be Netflix and YouTube (because Ryan Seacrest is no Dick Clark), and maybe watching the ball drop if we aren’t asleep by then. And if we are, I’m totally okay with that.

Baked brie with pecans and honey mustard is so simple that you really don’t have an excuse to not serve it. You just pour honey mustard over the brie and bake it while you toast some pecans, then sprinkle them on top and serve. It’s totally simple enough to fuel your New Year’s Rockin’ Eve on the couch but tasty and fancy enough to serve to guests or to take to a friend’s house for a New Year’s Eve party.

Grab some brie and make this baked brie with pecans and honey mustard!

Shared on Meal Plan Monday on Southern Bite and Weekend Potluck on The Country Cook. 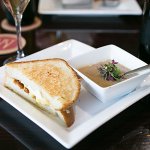 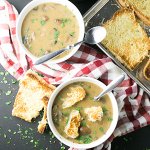