Tiny party sandwiches with bacon, melted cheese, caramelized onions, and a buttery sauce will make all your guests smile-if you choose to share.

Bacon & cheese party sandwiches are a direct descendent of the ham and cheese party sandwiches (sliders) that I’ve been seeing blowing up everyone’s Facebook and Pinterest feeds over the past several weeks. I first had those sandwiches at a baby shower a few years back and thought they were great, but somehow the flavors weren’t as pronounced as I would have liked. I like strong flavors. I’m the kind of person who’ll triple the garlic in a recipe and my cheese philosophy is “you can never have too much”. As I pondered what to make these sandwiches with, bacon, smoked gouda (after asking for suggestions from my Facebook followers), and caramelized onions sounded like a perfect flavor combo to me.

I’ve noticed a disturbing trend lately: bacon hating. Or maybe not hating, per se, but a bacon backlash. For a good while, there was a big-time bacon trend…everyone was putting bacon on everything. And while I am certain that people are always going to love bacon, I’ve been seeing and hearing a lot of food-obsessed types making fun of the bacon trend and it is a little bit upsetting to me. Because, you guys, I was bacon when bacon wasn’t cool. So I will continue to put bacon on anything I can find an excuse to put bacon on, and I won’t apologize for it.

I definitely won’t apologize for these bacon & cheese party sandwiches. While you can use any type of cheese that you’d like, the combination of smoky bacon and smoked Gouda cheese with just a little bit from the caramelized onions and sweetness from maple syrup setting off the saltiness of the bacon and cheese makes these bacon & cheese sandwiches a pretty transcendent snack food experience. The original recipe calls for Hawaiian slider rolls, which I didn’t see at my grocery store, but I wanted to use potato rolls instead. If you use Hawaiian rolls, leave out the maple syrup…it will make the sandwiches too sweet.

Put these bacon & cheese party sandwiches on your table for the big game this year. Your guests will thank you.

Shared on Weekend Potluck on Served Up With Love!

(Also, check out my adorable custom cutting board! My friend and her husband made it for me. Check out their Facebook Page – Markums’ Wood ‘n’ Glass!)

Feel free to add other meats here. For example, when I took these pictures, I had about 1/4 pound of turkey that I was afraid would go bad if I didn't use it, so I threw them on the sandwiches! 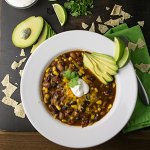 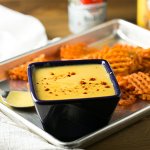