212 Market is a Southern cooking spot in downtown Chattanooga, near the Tennessee Aquarium, that has been around for many years.

How is it possible to be a food blogger in the town in which you grew up and you’ve never eaten at a restaurant that’s been around for twenty-one years?

212 Market has been open in Chattanooga’s downtown since 1992, around the same time that the formerly skid row-ish downtown area was being revitalized with the opening of the Tennessee Aquarium and lots of beautification projects. Back in the eighties you didn’t really go downtown unless you had to…say, you worked down there or something. It just wasn’t very smart. In the nineties it was much safer but old habits die hard and my parents didn’t care too much for the downtown area. It wasn’t until late in my high school career when I started going downtown with my friends that people from the suburbs felt safe going downtown.

I remember one of my best friends in high school loving 212 and going there often with her parents, but that was back in the age when lots of casual dining places were opening up in Hixson, starting with Applebee’s then later O’Charley’s and Chilis and those were the kinds of places where my friends and I hung out when we wanted a “nice” dinner, something besides our usual McDonald’s (I am not kidding). I lived downtown for four years while in college but still TGIFriday’s and Taco Mac were more my kind of hangouts. I recall Philip and I discussing going to 212 for our first dating anniversary but it never panned out. And so here we are twenty-one years after the inception of what I would now call an institution in the Chattanooga dining scene and I have finally eaten there (at this point I would say I haven’t been because I generally avoid the fairly congested area around the Aquarium….notice I haven’t blogged about Thai Smile or Hennen’s yet either).

So, we parked at the visitor’s lot at Unum and trekked it down to 212 Market for lunch (not really necessary, as 212 Market is one of the very few restaurants downtown that has free parking on-site for its patrons, but we like to walk). A sign was out detailing their brunch specials and though there were several tables occupied we were immediately seated. While the decor was not what I would call “contemporary”, it wasn’t outdated either. It was nice and comfy, and the first thing that I noticed was the Fiesta saucers on the table for bread. One of 212’s missions is to be as local as possible, and with the made in the USA Fiesta dishes they are really proving their point. We were given a brunch menu and a lunch menu, and our server Julia arrived very quickly with glasses of water for us, then a basket of focaccia and whole wheat bread. The bread is house made and had good flavor, though Philip and I agreed that the whole wheat bread was not really the kind of bread that is best served in a bread basket (a little too heavy/hearty).

Philip and I were both grabbed initially by the eggs Benedict on the brunch menu, but as usual decided against the brunch because we had already eaten eggs at breakfast. Honestly, I don’t even remember much else of what was on the brunch menu…I wish I had taken a picture of it! There is also a pretty comprehensive salad & starter menu, including a Mediterranean salad with hummus and quinoa tabbouleh, a strawberry and chèvre (goat cheese) salad, a bison spring roll (including locally-raised bison), and the obligatory Caesar salad. The spinach salad sounded particularly delicious with apples, gorgonzola, bacon, and spiced pecans dressed with orange-basil vinaigrette.

I wasn’t in it for a salad, though. While the burger with Alabama dry-aged beef sounded delicious, I was torn between the grilled pimento cheese sandwich and the signature spinach and walnut ravioli primavera. I asked Julia for her recommendation and she told me that both were very good….but from her descriptions, I could tell that her preference was for the pimento cheese sandwich. In fact, I felt that she threw down the gauntlet when she told me that their pimento cheese was the best that she had ever had…so I ordered it, with bacon, lettuce, and tomato, per her recommendation. She sounded a little less biased about the sides (which are $2 with a sandwich). Ultimately I decided to have the fruit…I definitely needed something besides fries, and I felt that fresh fruit would not compete with my sandwich. The fruit consisted of thinly sliced apples, kiwi, bananas, and nectarines, quartered strawberries, grapes, and and orange wedge. The fruit was very fresh and tasty, though I would have liked just a little more, or perhaps for it to be more of a “fruit salad” amalgam (I love a good fruit salad!). The sandwich was grilled to the point that the cheese was melty and drippy, but the outside of the sandwich was not greasy as it can sometimes be. While the bacon was included on the sandwich when I got it, the lettuce and tomato were on the side. The pimento cheese had shreds of cheddar and finely diced pimentos in it as well as green onions, which added a little zip to it. It was indeed among the best pimento cheese I’ve had at a restaurant…but not better than mine (sorry, 212). While, as I mentioned before, I thought the whole wheat bread was a little too “hearty” for a bread basket, I thought that it was an excellent sandwich bread.

Philip was seriously torn about his entrée. He thought the burger sounded amazing, but they had shrimp and grits on the menu and it is very difficult for him to pass up shrimp and grits. Julia told him that the dry-aged beef on the burgers was something that they had substituted once for the more local beef from Sequatchie Cove they used to make their burgers with, and their regular customers raved that they needed to keep the dry-aged beef on the menu…so they did. However, she stated that the shrimp and grits was one of her favorite items on the menu, the recipe of the Charlestonian grandmother of a former chef. While the sauce was not cream-based as he generally prefers (the grits were, though), Philip decided to take a chance and go for the grits: wild caught shrimp, Falls Mill stoneground grits, Link 41 andouille, black-eyed pea salsa, and fried green tomatoes. The shrimp were gigantic and very well-cooked, the andouille perfect (of course, Link 41 can do no wrong in our opinion), and the fried green tomatoes delicious…hand-coated in a cornmeal breading and fried to golden perfection. While the grits were loose, not in a fried grit cake form as Philip generally preferred, he was able to concede that while they were not the style of shrimp and grits that reeled him in or made shrimp and grits one of his favorite meals, they were still quite delicious.

Our final total was $26. Not too bad for a fine-dining restaurant, though we were definitely tempted to check out the dessert menu (since we had coconut ice cream and brown butter chocolate chip cookies at home, we figured we better abstain). 212 Market is definitely one of the most local restaurants around, making an amazing effort to source as many items as possible locally. With a registered dietician (Maggie Moses, one of the owners) consulting with them on their menu, they are able to offer many healthy options including clearly indicated gluten-free and vegetarian options. They are also a very “green” restaurant, practicing recycling and composting, sending scraps to local farmers to be fed to livestock, and sending leftover food to the Food Bank. They also have solar panels on the roof and electric car charging stations in the parking lot (and, need I point out again-FREE PARKING FOR PATRONS?!?!). They offer seasonal menus (allowing them to make the most of seasonal produce) as well as daily specials. I have no idea how it took us twenty-one years to try this place out, but I don’t think it will be another twenty-one years until we come back.

212 Market is a great place to try if you’re in Downtown Chattanooga! 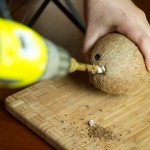 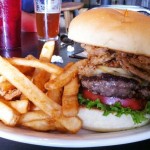