As we were driving home from our “meh” Chinese dining experience the weekend before last, we drove past 2 Crazy Greeks on Hixson Pike (next to Krystal) and I was all, “Dang! We should have gone there!” I’ve been craving Mediterranean food ravenously for the last couple of weeks for whatever reason. Suddenly, I knew that I had to have Greek food ASAP.

I rarely get office hours in my job but one day last week I had a few glorious hours to work on a PowerPoint for a presentation that I needed to do. Since I was going to be in Hixson, I asked Philip to come eat lunch with me at my office. We never get to eat lunch together, so that was a nice change of pace…and it was also nice to eat lunch at my desk rather than in my car.

Philip called in our order to 2 Crazy Greeks and I stopped by and picked it up. They told him that it would take ten minutes, which was definitely quicker than I expected…but we ordered right when they opened. It’s good to be on the ball. Now…in case you didn’t know, 2 Crazy Greeks is a food stand, not a restaurant…i.e. there’s no seating. There was a lady there placing an order when I arrived but they took my name and quickly got my order for me. The lady who waited on me was very friendly…I paid, took my order, and got to the office.

I like that the menu is small…I always think that when menus are kept small that restaurants can focus on the few items on the menu. I decided on the falafel. In case you aren’t familiar with falafel, it’s fried patties made from chickpeas and herbs. They are served on a pita with lettuce, tomato, and onion (which I promptly removed, of course) and tzatziki sauce, which is a sauce made with yogurt, cucumber, garlic, and dill. The sandwich was nice and warm and the falafel patties were very hot, a perfect foil for the cool vegetables and the tzatziki. Guys, this sandwich was amazing…very flavorful. The only thing that I would have changed (besides ordering it without onions next time) would be to have the tzatziki on the side so I could put it on myself and make it a little less messy to eat.

Philip decided to get the gyro. The traditional beef and lamb gyro is made with ground beef and ground lamb mixed with herbs and spices, spit-roasted, and shaved. Like my falafel, it was also served with lettuce, tomato, onion, and tzatziki on a pita. The meat was tender and delicious, very well-seasoned…and there was a huge portion of meat on the sandwich. In fact, Philip wasn’t able to finish it because it was so large (don’t worry…I finished mine). He did say that he thought it probably could have used a little less tzatziki…but I think again that serving it on the side would fix the problem, which was basically that all the tzatziki was at the top of the sandwich so it made it very messy to eat.

We split an order of feta fries. They were hand-cut fries with herbed feta cheese (oregano was a very prominent flavor in the cheese) and drizzled with olive oil. As is typical with hand-cut fries, they weren’t super-crispy…and that’s okay with me. I love hand-cut fries and everything about them. They were salted perfectly and, despite the olive oil drizzle, not greasy. Because of the feta cheese, these fries were best eaten with a fork.

One thing that I read in one of the reviews on Facebook or Yelp was that it was pricy for the amount of food that you get. My falafel ($6), Philip’s gyro ($6.75), and the feta fries ($4.75) cost a total of $19.12 including tax. I felt that the portions were very generous, certainly plenty for us, and I didn’t think it was pricy at all considering the quality and flavor of the food. I wouldn’t bat an eye at paying that at a full-service restaurant. I thought it was worth it! If you’re a fan of Greek food, you definitely need to check out 2 Crazy Greeks! 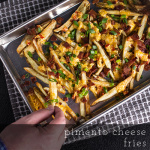